Solar ovens can make fun science projects to attempt with kids, and they can also be practical tools that will allow you to heat food with no heat source other than the sun. And if you want to have a go at making your own DIY solar oven, here are 19 great plans that teach you how.

1. How to Make a DIY Solar Oven 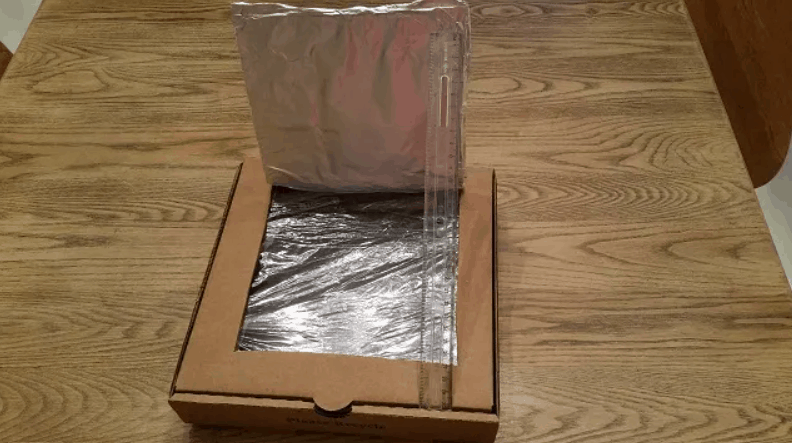 If you have kids, making a solar oven from cardboard boxes could be a great way to teach them about the power of the sun. You can make one using just simple items you’re sure to already have at home, and when it’s ready, you can try cooking something like toast or a hotdog in it – and then discuss with them why it works after it’s done!

For anyone looking for something a bit more advanced than just a kids’ school science project, this is a plan that should be of interest. It teaches you how to make an advanced and highly impressive solar oven that can be used for real cooking. And it’s not even that difficult to build, so why not see if you can copy the idea? 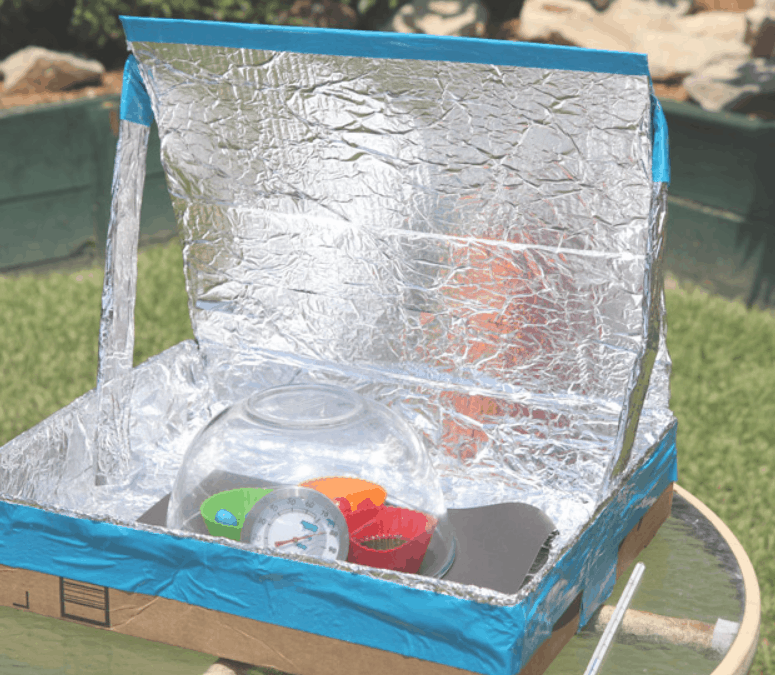 Here’s another plan for a solar oven that you can build with your kids – although it will definitely cook stuff, and it will get hot, so make sure you supervise them properly. With temperatures rising around the world, it makes sense to harness the power of the sun for cooking – and this tutorial demonstrates how.

4. Save Money by Building a Solar Oven in Minutes

In places that have lots of sunny weather, it’s logical to use the sun for cooking. It isn’t just a fun project for kids – it can be a genuine way of saving money while also cooking in the most environmentally friendly way possible. And if you want to know how to build a viable solar oven, this video will show you one way to do it. 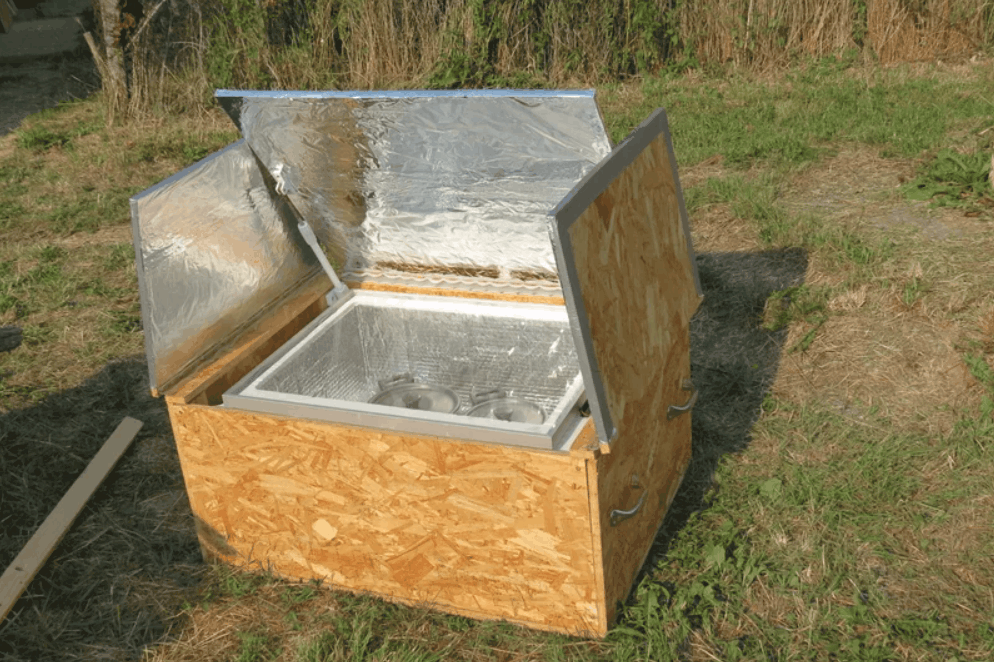 For those who don’t know it, the Instructables site is a treasure trove of plans for just about any DIY project you can imagine, and this one for a DIY solar oven is another great addition to the collection. It teaches you how to make an oven capable of cooking a range of food and that can reach around 120°C/250°F on a moderately hot and sunny day. The secret is good insulation, and if you can get that part right, you’ll be cooking on solar in no time!

6. Build Your Own Homemade Solar Oven

If you’re not convinced a solar cooker can deliver the kind of temperatures required for cooking, this video should settle it for you because, as we get to see, the reading shows 300°F – easily hot enough to boil water. And this is in spring, but this YouTuber estimates in summer it could easily reach 400°F. Are you convinced now? Then give his video a watch to see how he managed it.

7. How to Make a Solar Oven 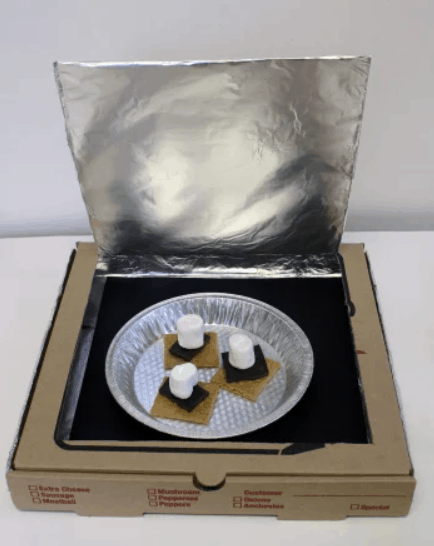 This is another science project-type plan, and in it, you learn how to make a simple oven from a pizza box. The writer of this plan estimates it will give you temperatures of up to 200°, which is hot enough to bake a potato. So for something so inexpensive and easy to make, that’s got to be worth trying!

8. DIY Solar Oven on the Cheap

In this video, this YouTuber shows us his design for a simple and extremely inexpensive solar oven he made using an old cooler, some duct tape, an emergency blanket and one or two other household items. While he admits it takes longer than a regular oven, it works well, so knowing how to make something like this could be useful in an end-of-the-world emergency situation.

9. How to Make and Use a Solar Oven 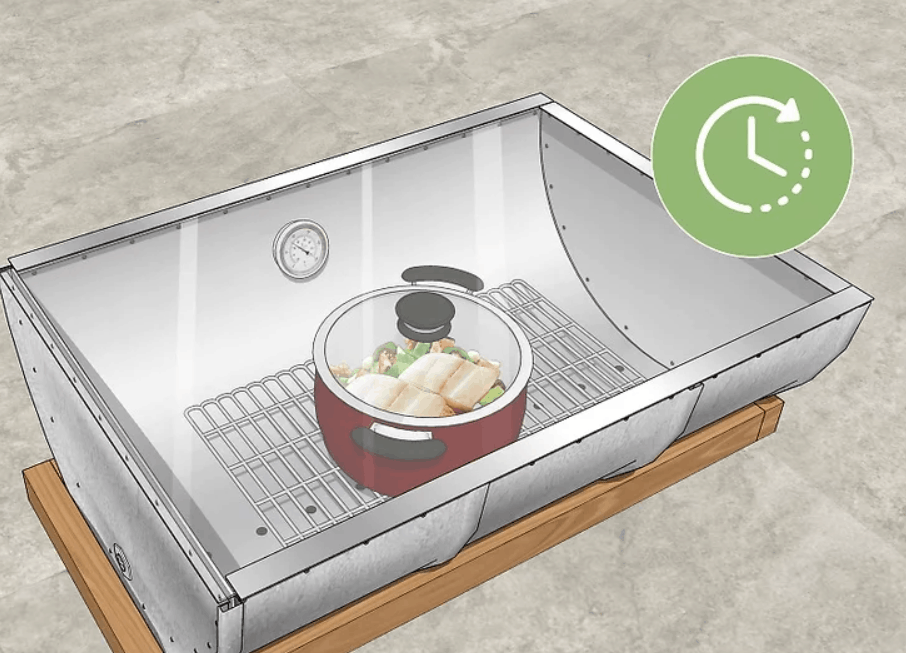 WikiHow is always a fantastic resource whenever you need to know how to do just about anything, and this guide to building a solar oven is another worthy addition to the site. We like the simple design of the oven it shows you how to make as well as the clear instructions and helpful images. So in short, if you want to make a functional solar oven, this tutorial teaches you everything you need to know.

10. How to Make a Simple Solar Cooker to Understand the Use of Solar Energy

For those interested in learning a little bit about the physics of solar ovens before they build one, this video is highly recommended. In it, this YouTuber discusses how solar ovens work, introducing two types – the heat trap oven and the parabolic oven. He then goes on to demonstrate how to build one, allowing you to put your new knowledge into action.

11. How to Build Your Own Cheap, Simple Solar Oven 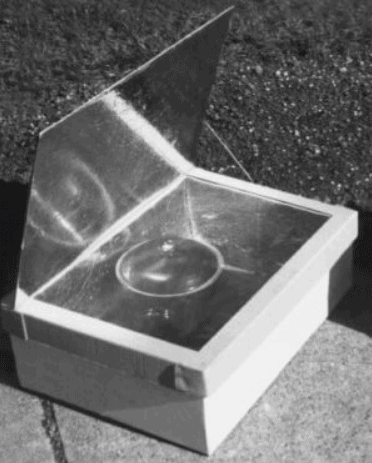 Many plans we’ve seen jump right in and get straight to constructing the oven, but this one goes into a lot of detail about how they work, why you might want to use one and much more. Of course, after that, it then shows you how to build one, making this a highly informative plan for those who want to know more about the design they’re building.

If you prefer the kind of DIY project where you repurpose old stuff you probably already own rather than buying new equipment to use, this one is for you. In the tutorial, this YouTuber shows us how he made an extremely cheap and easy solar oven that does a great job cooking things like hot dogs and more. So if you want to harness the heat of the sun for some free culinary experiments, this is a plan you should enjoy. 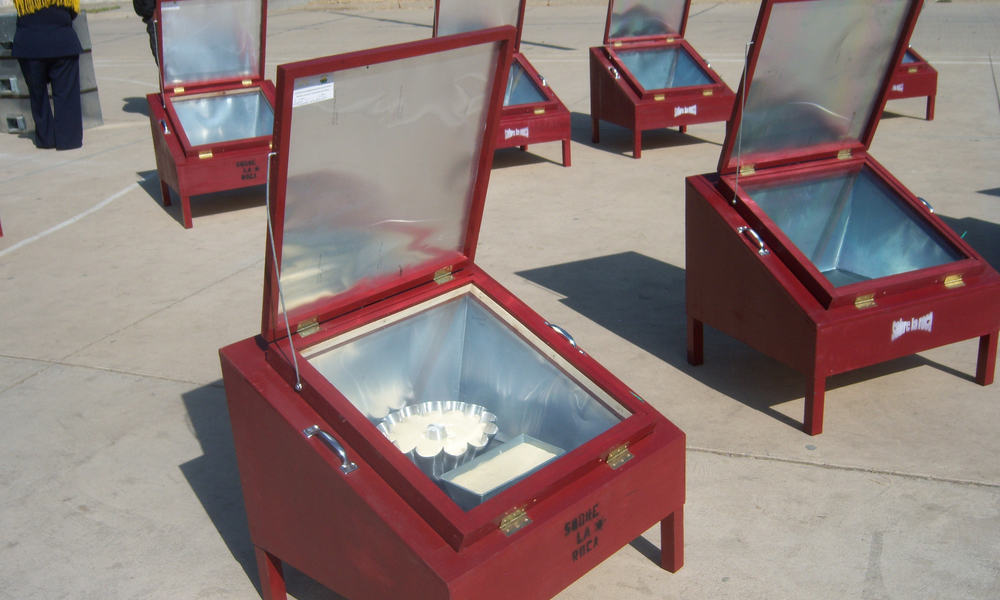 There’s nothing new about solar cooking – in fact, this plan was originally published in 1959! But what’s true is that now we’re more ecologically aware, they’re becoming more popular than ever, and this plan shows you a tried and tested method for building one.

14. How to Turn a Pizza Box into a Solar Oven

Here’s an intriguing idea – turn your pizza box into a solar oven and then use it to reheat the pizza that came in it! You’ll need a few other supplies, but it’s all stuff you probably already have at home anyway, and once it’s done, you’ll be able to reheat your pizza – or anything else – in a solar oven you made yourself.

15. How to Build a Solar Oven and Why 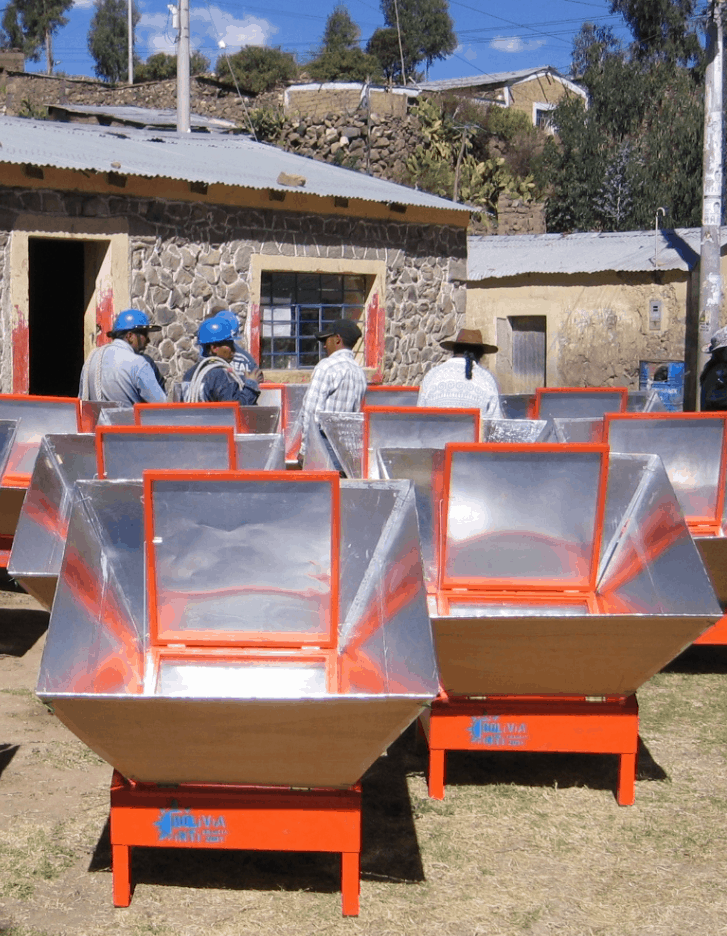 This is not a plan as such, but it shows you why solar cooking can be such a useful method, so we thought we’d include it anyway. In this post, you can read about the people of a village in Arequipa, Peru, who now use solar ovens for most of their cooking. Rather than walk nearly two miles for firewood, it’s much more convenient for them to just use the power of the sun. And if you build a solar oven, you can try doing the same thing.

16. My New DIY Solar Oven in the First Stages

The DIY solar oven in this video looks highly professional, although when the YouTuber explains how he built it, you realize that it was actually a relatively simple job. This is a first effort too – so you can also check out the second video to see the improvements he made. 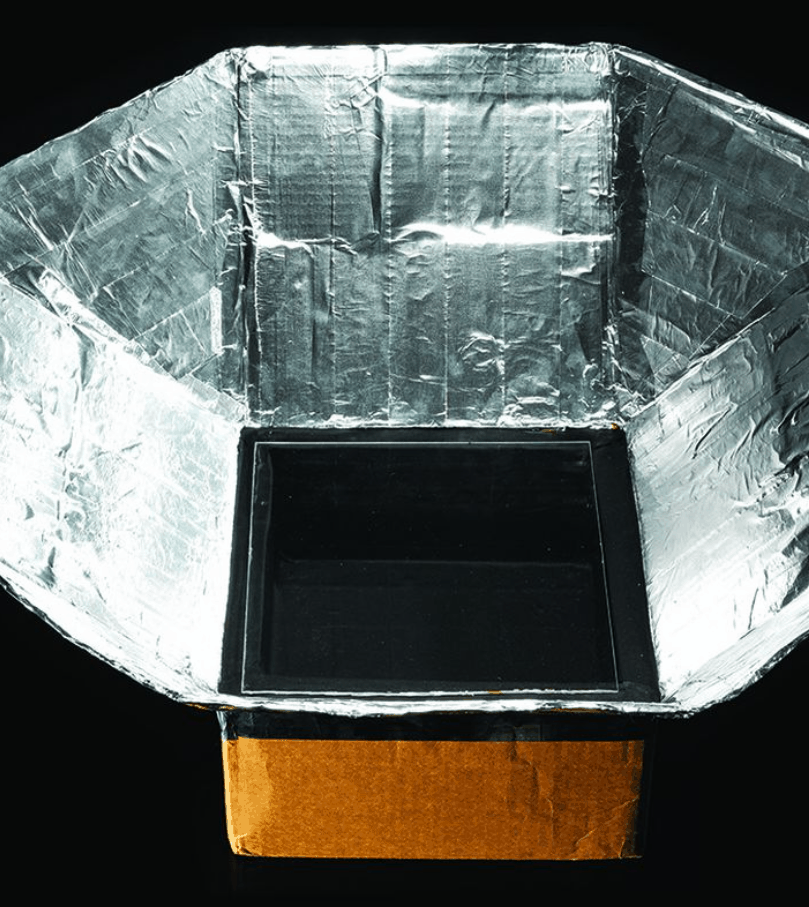 Sometimes it can be fun to attempt a DIY project just to see if the scientific theory behind an idea works in practice. Building a solar oven is a perfect example, and this plan teaches you how to build one that should be able to reach up to 200°F – so why not have a go to see if you can make it work?

18. Making a Solar Cooker from a Car Windshield Sunshade

Here’s a plan for an improvised solar oven made from a car windshield sunshade and a cooking pot. If you found yourself out in the wilderness with nothing else, you could potentially rig one of these up, something that might be a lifesaver in a survival situation if you had no other way of cooking food or heating water. 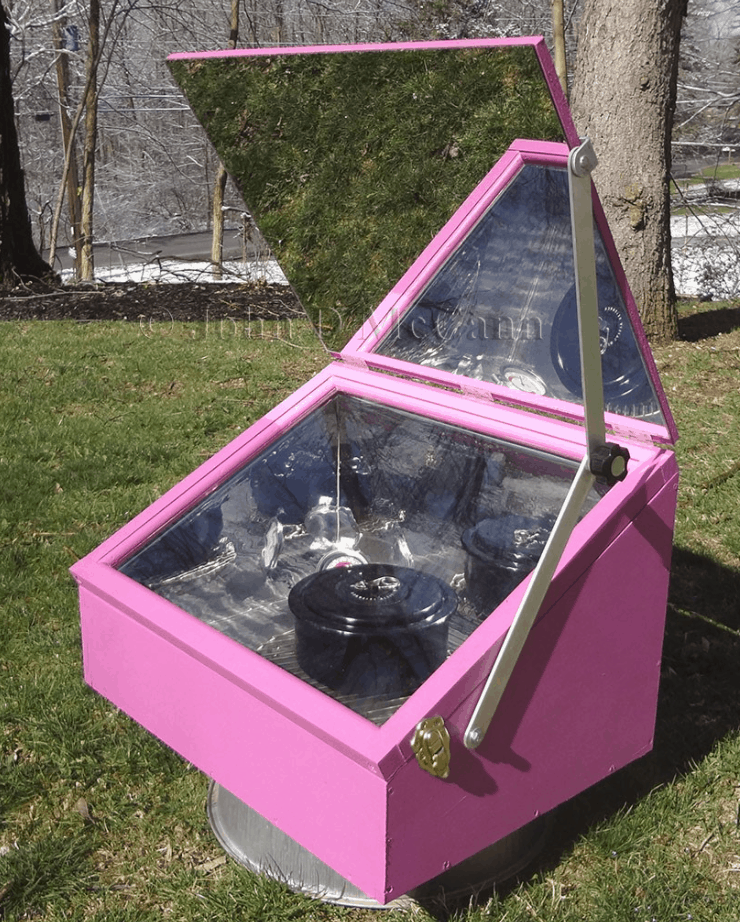 Solar ovens are popular with survivalists and preppers for a couple of good reasons – because they allow you to cook food with nothing but the heat of the sun and because they won’t create smoke that might give away your position. However, if you think you might need one at some point in the future, it’s a good idea to learn how to make it before that need arises, and this blog has a great plan that will show you how it’s done.

As you can see, there are quite a few ways to build solar ovens, often using simple techniques and inexpensive materials.

We hope you’ve enjoyed reading and watching these plans as much as we have finding them for you because, for us, this is a fascinating subject – and above all, we hope we’ve also helped you find the plan you needed for building a DIY solar oven of your own.