Skip to content
Lucky Belly » Does Half and Half Go Bad? How Long Does It Last?

Unless you love your coffee black, you probably have a pack of half and half in your fridge just waiting for your next cup of joe. And if you are like most people, you likely buy more than one packet so you never run out. But sometimes the best-before date may arrive before you can use all the creamer, which could get you asking yourself the following question:

Does Half and Half Go Bad? 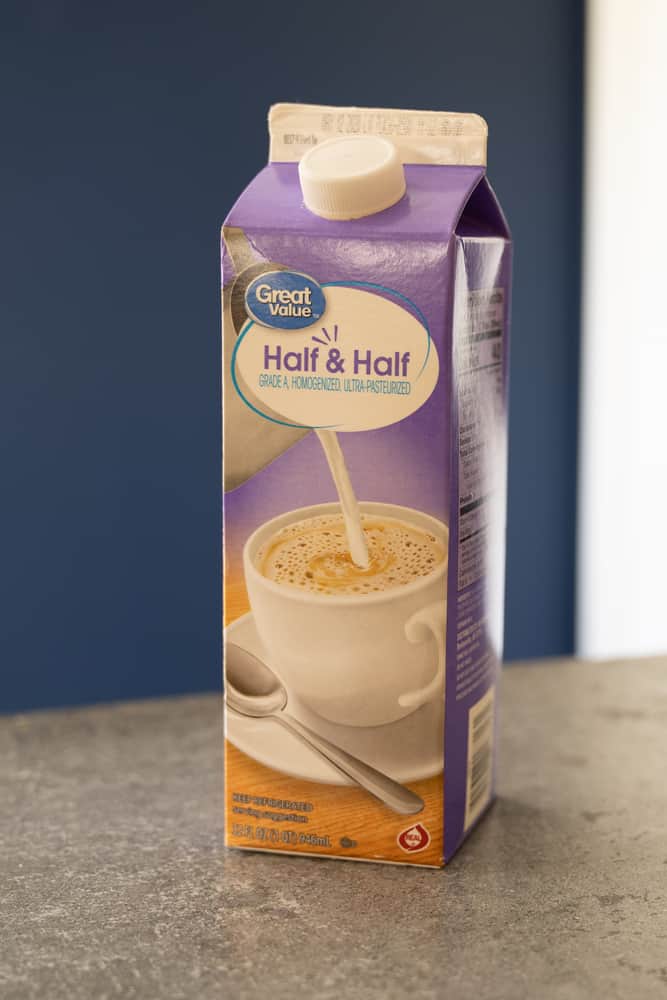 But how long your half and half remains fresh will depend on how you store it. The cartons you buy from the refrigerated section of the grocery must stay in the fridge at all times.

The little canned cups won’t require refrigeration, but they must be stored away from heat sources. The canning process destroys microorganisms that could cause the creamers to spoil, extending their shelf life.

How Long Does Half and Half Last?

As with all food products, half and half will come with a best-by date printed on the carton, to indicate how long the creamer will last.

Now, unlike milk that will go bad two to three days after the printed date, half and half can stay fresh for up to ten days. And that is just for the refrigerated variety. The tiny canned cups can last for up to five months after manufacturing, thanks to the added preservation.

Once a carton has been opened, refrigerated half and half should be consumed within seven to ten days. But you will notice that the quality starts to drop after the fifth day. If the carton is opened after the best-before date, it should be finished within two or three days.

The individual half and half cups, as mentioned, have a relatively longer shelf life. If stored in a cool place away from light, they can stay good for up to two months past the best-by date.

Here is a summary of half and half shelf life.

6 Tips to Tell if Half and Half Has Gone Bad

If you have a carton of half and half that has been sitting in the refrigerator for several days or a few cups of the creamer in the pantry, it’s important that you examine them carefully before consumption to ensure the product is safe. Here are some signs to look out for.

Clumps are the number one indicator that your half and half is ready to be tossed out. Lumps develop when the product has been mishandled or overstayed in storage.

Sadly, when your daily product is in such a state, there is nothing you can do to save it. You need to throw it away.

Sour odor? You should most definitely discard that cup or carton of half and half. It helps to know what the product smells like when new. That way, you will know when it stinks.

In rare cases, half and half may develop mold. This mostly happens if a food item was left unwrapped near the creamer. If this item introduces mold spores into the half and half, the creamer will certainly be unfit for consumption.

Curdling occurs when the proteins inside the creamer start to clump together and alter the PH. It’s mostly caused by bacteria sneaking into the product perhaps during the manufacturing process or from leaving the container open. It can also be a result of the product being stored at high temperatures.

If you don’t want your coffee with curdled half and half but still don’t want to get rid of the creamer, you can try using it in baking, cooking, or other similar applications. It will still taste quite okay.

If half and half is stored for a prolonged period, the milk will separate from the cream. That’s why the package usually states that the product be shaken before use.

It is normal for half and half to separate and shaking it always blends everything back together. However, if after several shakes the product still appears separated, it has probably gone bad and should be discarded.

If the product has been sitting in storage way past the date printed on the package or past the periods we discussed earlier, it’s best to toss it out. The quality could still be pretty decent but do not consume the product if you are not sure whether it is safe to do so.

4 Tips to Store Half and Half

Proper storage is key to extending the life of all dairy products, and half and half is no exception. Below are a few tips to help your cream stay fresh and tasty for a longer period:

Once you have opened a carton of half and half, make sure you have sealed it properly before placing it in the refrigerator.

The good news? Most manufacturers are now producing the creamer in resealable containers, which makes it easier to store leftovers sealed.  If yours cannot be resealed, consider pouring the creamer into an airtight container, plastic bottle, or mason jar. Really, anything that doesn’t let air in will do.

2.    Place Away From the Fridge Door

While it can be tempting to place your half and half carton in the fridge door for easier access, this is not the best spot to store your cream if you hope to keep it fresh, longer. Temperatures tend to fluctuate a lot in this part of the refrigerator, which could put the creamer at risk of curdling.

Place half and half at the far corner of the fridge, and as we mentioned above, make sure it is properly sealed.

3.    Place Away From Strong-Scented Food Items

Your creamer will quickly pick up odors from adjacent foods. To avoid this, make sure the carton is tightly sealed and you are not storing it near food items with strong smells.

4.    Store Tiny Half and Half Creams in a Cool Place

Although individual half and half cups are shelf-stable and don’t require refrigeration, they must be stored in a cool location, away from stove heat or sunlight. The pantry would be the best option but a kitchen cabinet where you keep your coffee would be just fine.

If you make your own coffee cream at home, make sure to store it in the refrigerator at all times or in the freezer for extended lifespan.

Watch this video for tips on how to store homemade creamers:

The Risk of Consuming Expired Half and Half

Because of the huge amounts of milk used to make half and half, the foul odor and taste of spoiled half and half will immediately turn off most people, which makes the decision on whether to consume it or not relatively easy.

However, even if you are able to get past the bad smell and taste, ingesting half and half that has gone bad is still not a good idea. The product can cause food poisoning, which may bring about stomach pain, vomiting, nausea, diarrhea, and many other uncomfortable digestive symptoms.

You may not need to worry if the volume of cream consumed is fairly small, as it will likely not have any adverse effects, but you should avoid consuming the product in large quantities.

Can You Freeze Half and Half?

Yes, you can freeze half and half, but keep in mind that it will affect its original taste and texture. In fact, many half and half manufacturers advise against freezing the product.

You see, once frozen and thawed, stirring will not exactly blend it back to its original state. Because of that, it will likely not work with food items that depend on its texture, but it should still be good for coffee.

That said, if you still want to freeze your creamer make sure you have an airtight container. Pour the liquid in there, seal the container tightly, and place it in the freezer.

A better way of doing it is to first pour the cream into an ice cube tray, then transfer the frozen cubes to an airtight container or Ziplock bag before putting them back in the freezer.

As with all daily products, it is always good to examine your half and half before you ingest it especially if you have had it sitting in the fridge for several days. Check for signs of curdling, mold, bad odor, and change of texture. If you think a packet is not safe for consumption, it probably isn’t. Discard it right away.