You love your Keurig, but it’s no longer working the way it should. You want to get inside to figure out the problem and see if you can fix it.

And even if it’s beyond repair, you think it may still be worth the work. There’ll be parts you can salvage and use for other projects.

If you think this sounds daunting, don’t be deterred! We’ll take you step by step through how to disassemble a Keurig. And we’ll make sure you’re able to get to all the parts that might be causing a problem.

If you’ve got a specific issue you want to fix, we recommend searching for some dedicated advice. This tutorial is a great starting point if you’re not sure where the problem lies.

One word of warning: don’t try your own repairs if your Keurig is still under warranty. Any attempts to fix it yourself will void the warranty.

All clear? Then let’s get started!

How to Disassemble a Keurig: Step by step instructions

Step 1: Prepare the machine for disassembly 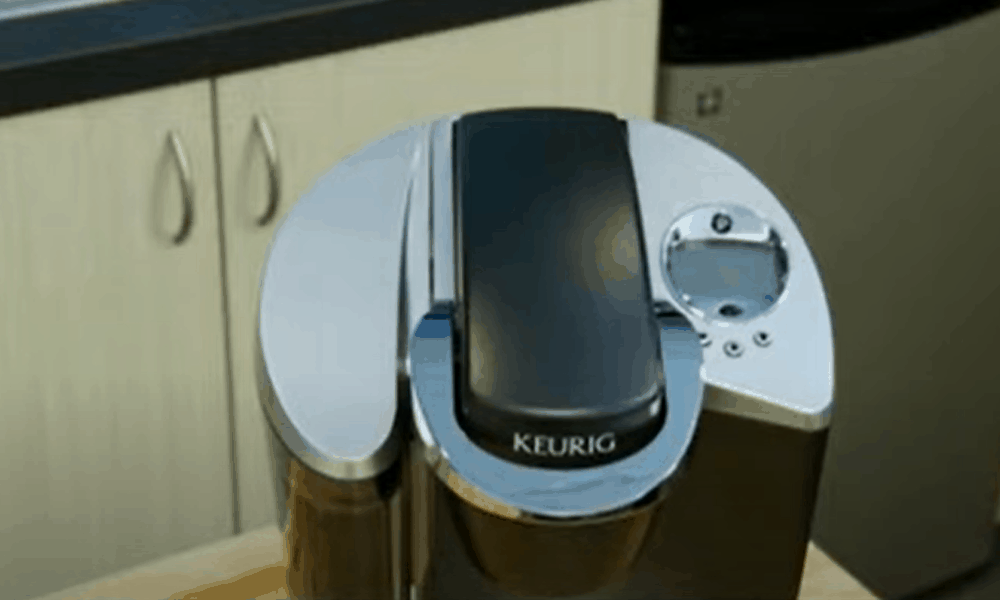 You don’t want to risk an electric shock when you start poking around inside! So the first step is to unplug your Keurig.

Place it on a couple of towels on a flat surface. The towels will protect the casing from damage as you move it around. They’ll also absorb any water that leaks out.

Next, remove the water reservoir from the side of the machine, and the drip tray from the bottom.

Step 2a: Make sure you need to take your Keurig apart! 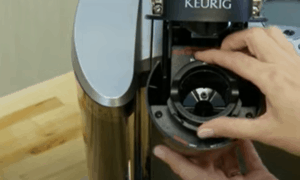 One of the most common problems people experience after they’ve had their Keurig a while is slow coffee flow. If that’s the issue, you may not need to take it apart. The culprit is often a build-up of coffee grounds around the needles that pierce the K-cup.

Check this out by opening the K-cup compartment. You’ll see a sharp needle on the inside of the compartment lid, with a rubber gasket around it. Remove the gasket – be careful, because the needle is sharp!

Now straighten out a paperclip. You’ll see there are two holes behind the needle. Push the paperclip inside those holes to dislodge any trapped grounds.

Step 2b: Finish de-clogging the Keurig 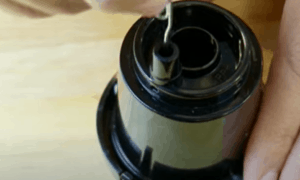 Now take out the plastic holder for the K-cup. This also has a needle inside, so check that it’s clean by wiping it with a damp, lint-free cloth. Remember, it’s sharp – so be careful.

Now separate the funnel (at the bottom) from the K-cup holder (at the top). You may be able to just pull them apart.

Or if your version has holes around the side, push a slotted screwdriver into them as you push the halves apart with your thumb.

Turn over the top section and you’ll see another hole. Blow through it and then give it a prod with that trusty paperclip.

Put the two halves of the cup together again and replace it in your Keurig. If the problem was clogging, these steps should have sorted it out. Replace the reservoir and drip try and plug it back in. Now brew a coffee to see if they’ve done the trick.

Step 3: Remove the base plate 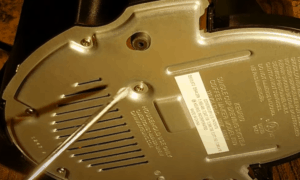 If you still have a problem, you’ll need to unplug the machine again, and remove the reservoir and drip tray once more. Take the K-cup holder out as well, so you don’t risk it falling out and getting damaged as you’re working.

Turn the Keurig onto its side. You’ll see a number of screws holding the base plate in position. Unscrew them with your Phillips-head screwdriver and set them to one side.

Pro Tips: Keep each set of screws you remove in a separate bag. Draw a diagram to show where they go and pop that into the bag too. That way reassembly will be a lot easier.

The base plate will still be attached to the Keurig by ground wires. If you need to do serious repairs, you may need to cut these wires. For now, though, leave them alone. 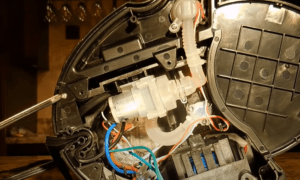 You’ll see four more screws that hold the plastic collar at the bottom of the Keurig in place. Two are near the front, where the drip tray sits, and there are two more at the back. Unscrew these and put them to one side.

You’ll see a small metal clamp holding a silicone tube to a white plastic attachment. That attachment is the pump. Using your pliers, ease the clamp down the tube, away from the pump. Then use your fingers to gently pull the silicone “boot” at the end of the tube off the pump.

At the bottom of the base, you’ll see a cable the power cable held in a plastic groove. Slip it out of that groove.

Step 5: Remove the tube connecting the reservoir to the pump 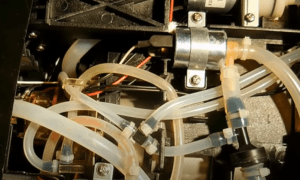 The other end of the tube you’ve just disconnected from the pump goes to the water reservoir. You’ll see it’s held in place with two more screws. Unscrew these and set aside.

Now move the tube out of the way. You won’t be able to remove it entirely, as it will still be connected by red and white wires.

Pro Tips: The red and white wires power the LED that lights up the reservoir. If the light is no longer working, the most likely explanation is that the wires are damaged. Try replacing them to fix the problem.

The LED itself sits inside the tube you’ve just removed. If the lighting problem is with the LED rather than the wires, you’ll need to replace this section of tube.

Step 6: Finish removing the base plate 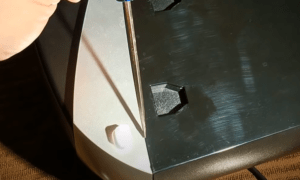 Use your drill to remove the rivet holding the earth wires to the metal base plate. (You’ll need to replace this when it comes to reassembly. Use a tiny screw on the outside of the plate, and a washer and a rivet on the inside.)

You should now be able to entirely remove both the base plate and the plastic collar at the bottom. 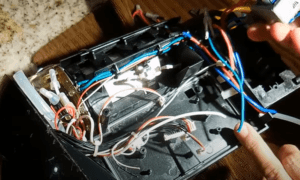 Now it’s time to get out your long handled screwdriver. The handle needs to be long enough to reach inside the Keurig to remove the hidden screw that holds the whole plastic case in place.

As you face the machine with the coffee funnel in front, the screw is on the right hand side. It’s a long way up inside, so you may need a torch to spot it. Unscrew it and set it to one side.

Now take the top of the Keurig in one hand and the bottom in the other. Pull the two pieces apart carefully. You’ll begin to see a gap, but they won’t come apart completely. That’s because there are also three plastic clips that we need to deal with. 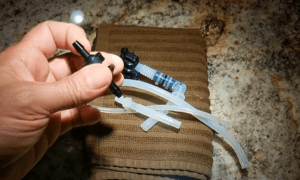 Widen the gap between the top and bottom sections as far as it will go. Then insert your short handled screwdriver into the gap as close as possible to the corner of the unit. You’re aiming to press onto one of the plastic clips to release it.

Two of the clips are about an inch from the corner of the unit. Take a look at this video to see where to locate them. The third clip is below the LCD screen.

This is very fiddly, so be patient! Once you’ve separated the first clip, repeat the process with the other two.

Step 9: If the clips still haven’t opened – get physical!

If you find you just can’t get the clips to release, there is another way. It will almost certainly damage the clips, but the damage won’t harm the operation of your Keurig. And it won’t be visible when you reassemble it.

You’ll now be able to remove the plastic housing. Just take one section in each hand and slide them apart. You’ll be able to see all the components in the body of your machine.

You can also remove the handle and lid from the K-cup compartment if you need to. This excellent video shows you how.

We hope you’ve found this tutorial helpful. Taking apart a Keurig isn’t easy, but if your machine isn’t working and its warranty has expired, it can mean the difference between fixing it and sending it to landfill.

If you’ve tried this, we’d love to hear how you got on. Did you manage to identify the problem? And were you able to fix it?

And if you’ve found this guide useful, please share it. Together we can save money and conserve the planet’s resources!

2 thoughts on “10 Easy Steps to Disassemble a Keurig”