Have you noticed in the last few years how coffee shop menus have become increasingly elaborate and that ordering a drink has become ever more complicated?

Before, you could just ask for a regular coffee.

Now, you are confronted by a bewildering array of options that includes such creations as “iced caramel wet cappuccinos” and “grande white chocolate double macchiatos”.

It’s all enough to scare you away from your favorite coffee shop.

The 28 Types of Coffee Comparison Chart 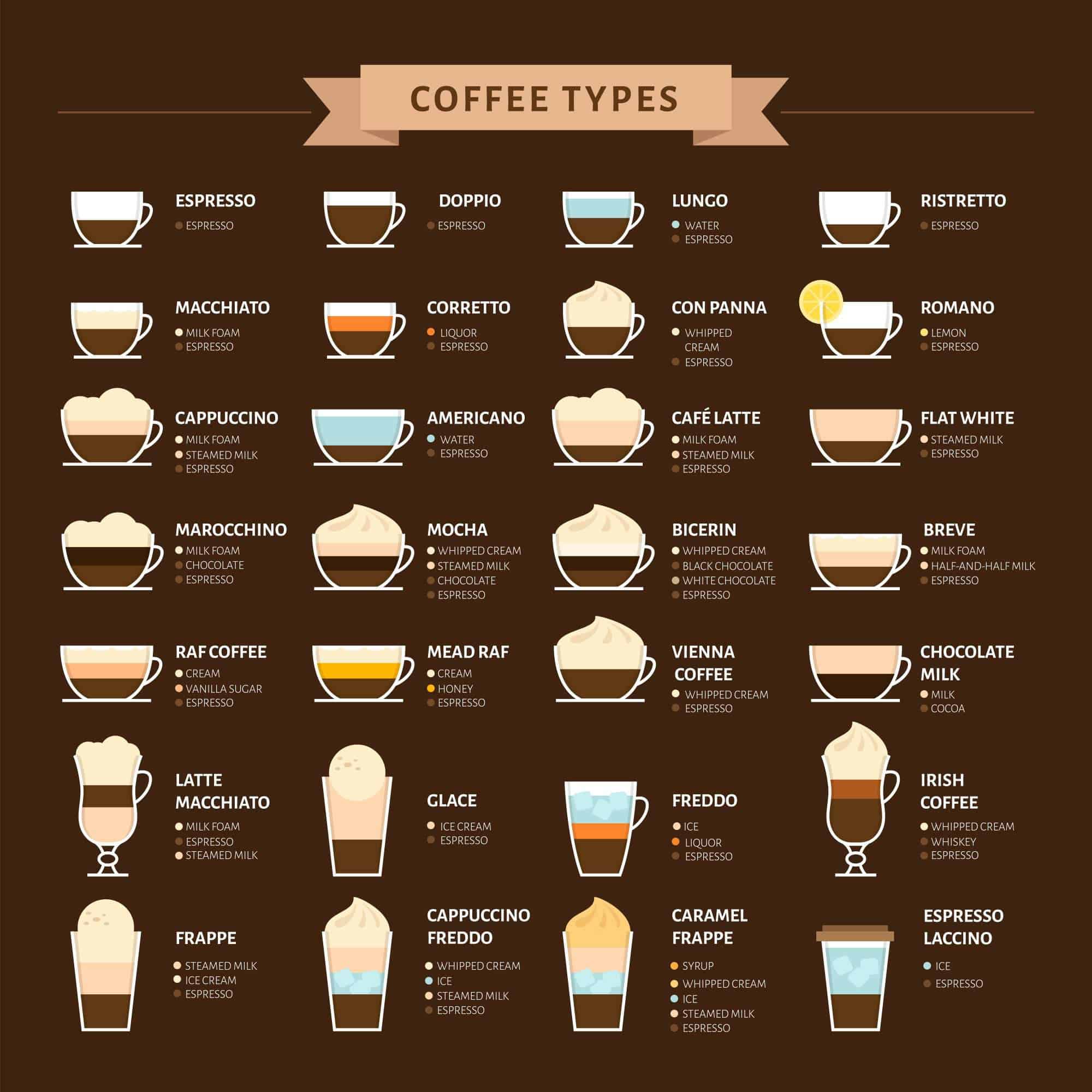 When you go to a coffee shop, be it a large international chain or a small independent, many of the coffee drinks available are built from the humble espresso.

Actually, we should probably avoid the word “humble” to describe espresso; for some devotees, the rich and potent espresso represents the pinnacle of coffee making, the only true way to enjoy the drink. To these people, everything else is simply an inferior derivative.

The espresso as we know it today has existed since around the 1950s, and its history and development has depended on the evolution of the espresso machine.

An espresso is a shot of strong coffee made by passing hot steam through a small amount of finely ground coffee in a “puck”.

Pulling the perfect espresso is a fine art, and variables include the machine used (of which there are many), the grind of the coffee, the coffee itself, the water, the temperature of the water and the timing.

An espresso should be dark black in color and have a thin layer of brown froth on top, known as the crema. Since the volume of an espresso is small, white sugar should be preferred over brown sugar if you want to sweeten it since brown sugar causes it to cool quicker

Cappuccinos have long been a familiar item on coffee shop menus, and in their modern form, have been around for about the same amount of time as espressos. This is because it was the invention of the modern espresso machine that allowed their creation.

A cappuccino is made by pouring a double espresso into a cup and then topping up with steamed milk and foam in a ratio of about 1:1:1.

Cappuccinos are some sometimes topped with chocolate or cinnamon powder and skilled baristas are able to create intricate patterns in the foam, known as “latte art”. If you’re interested in finding out how to make the perfect cappuccino, check out this video.

A variation of the cappuccino is the “dry cappuccino” – this is a cappuccino made with the espresso shot and the foam but without the milk. This produces a stronger drink with more espresso flavor.

The modern cappuccino comes from Italy, although it is now one of the best-known coffee drinks in the world.

In Italy, cappuccino is considered a morning drink. There, breakfasts are usually light and often consist of a cappuccino accompanied by a sweet pastry of some kind. Cappuccinos are not normally served after 11am, and in Italy, it would be considered strange to order one after that time.

In many other countries, cappuccinos are commonly enjoyed throughout the day.

What is Caffè Latte

Latte is the Italian word for milk, and caffè latte literally means “milk coffee”. Nowadays, however, latte is generally understood to mean something more than just a simple coffee with milk, at least in North America as well as in American-style coffee chains around the world.

A latte is in some ways similar to a cappuccino but the key difference is the ratio of milk to foam. In a cappuccino, the volume of espresso, milk and foam is the same, but with a latte, the milk takes up most of the drink – with just a thin layer of foam on top.

To make a latte, start with the double espresso shot in the bottom of a tall glass, fill most of the glass with steamed milk and finally finish off with a small amount of foam. As with cappuccinos, baristas often decorate the foam with latte art, and this is where the name of the practice comes from.

With the recent explosion of coffee shops around the world, the latte has become one of the most popular coffee drinks. Chains and independents alike have come up with all manner of original creations by adding various flavors, such as vanilla or caramel, as well as many other ingredients.

Lattes are traditionally served in a tall glass while cappuccinos are served in a round cup with a handle.

Macchiato in Italian means “marked” or “stained” – and a true, original-style macchiato is an espresso with a small drop of milk, an espresso that has been “marked” by the milk.

In some modern coffee shops and other chains, the word macchiato has been taken and applied to other coffee drinks that are not really macchiatos at all. Sometimes they consist of an espresso with a dollop of foam and sometimes they resemble something more like a cappuccino or latte (1).

Just because you call it a macchiato, it doesn’t make it one!

A macchiato has a strong espresso flavor. This is an excellent choice for someone who enjoys the intensity of an espresso but who is in the mood for something slightly lighter and longer.

Mocha, sometimes caffè mocha, is a North American invention. This drink is essentially a caffè latte with the addition of chocolate. In its simplest form, it can just be a hot chocolate with an espresso shot poured in, although many are far more extravagant than that.

There are many different ways to make a mocha, although the idea is generally to produce a luxurious, self-indulgent drink. The chocolate can be powdered or in liquid form and can be dark, milk or white chocolate.

This is the reason you may sometimes see variations in coffee shops such as “white chocolate mocha” – this would resemble a caffè latte with white chocolate added to it.

Don’t confuse mocha the drink with mocha coffee beans, it’s not the same thing at all. Mocha is actually a place in Yemen, one of the first places in the world where coffee was drunk.

Coffee beans have been grown in Mocha for hundreds of years, and the location has given its name to the beans that originate there.

Confusingly, the name of the chocolate coffee drink is also named after the place in Yemen, perhaps because the beans grown there naturally have a hint of chocolate.

Mocha drinks and mocha beans should also not be confused with the ‘moka’. This refers to the traditional Italian coffee maker that is placed on a stove and produces a coffee similar to but not quite the same as modern espresso ( 2).

What is Flat White

Another preparation of coffee in the same family as cappuccino, latte and mocha is the “flat white”. This drink is made by placing a shot of espresso in the bottom of a cup, usually a cappuccino-style cup, and then adding milk and foam.

The difference is that, compared to a latte, the ratio of milk to coffee is lower. It could be described as a latte with less milk or a cappuccino with less foam! In any case, the espresso flavor is stronger than in either of the more recognized drinks.

Flat whites are especially popular in Australia and New Zealand.

What is Café au lait

Café au lait is French for ‘coffee with milk’ and – literally speaking – has the same meaning as the Italian caffè latte. However, a café au lait on a coffee shop menu will be a completely different drink from the caffè latte we described above.

If you order a café au lait in a coffee shop, you will be served a smaller coffee, this time probably made with a French press or using a drip filter. And of course, it will be served with milk.

This kind of coffee is a popular breakfast coffee in France, where black coffee is more common after lunch or dinner.

Compared to cappuccinos, lattes and other similar drinks, the most obvious difference, other than that they are not made with espresso, is the lack of foam on a café au lait.

The good old Americano is the go-to drink when you don’t want all this fancy stuff with froth and art and chocolate and caramel. This is just a no-nonsense long, black coffee.

An Americano is made by first making an espresso shot, or maybe a double, and then simply adding hot water to make a long drink (3).

A similar drink, known as a lungo, is made by pulling an espresso but then letting the water keep coming through when the coffee has all been extracted. The end result is similar to an Americano.

What is Iced coffee

Most of the coffee drinks we know and love are also available as iced versions. Iced cappuccinos and iced lattes are now extremely popular, especially during the hot summer months.

Many coffee aficionados would claim that cold-brewed iced coffee is a far superior drink – but it also takes much longer to brew, between 12 and 48 hours. This means that in a coffee shop, especially in a large chain, you are much more likely to be served hot-brewed iced coffee.

Iced coffee is popular around the world, and unsurprisingly, it is a very common beverage in hot countries. Places like Thailand and Vietnam have their own delicious distinctive versions.

We can’t talk about different types of coffee without mentioning Irish coffee – although you won’t be able to find this one at your local Starbuck’s.

Irish coffee is hot black coffee with a shot of whisky thrown in to liven things up. It is then topped with a layer of cream. The perfect coffee to keep you warm during the winter. Here’s a great recipe we found for Irish coffee.

A few words on coffee jargon

Many coffee-related words like “cappuccino” and “latte” have been absorbed into English, mainly from Italian.

Many coffee shops now take it a step further and insist on using exotic-sounding foreign words for everything, for example selling their coffees in sizes like grande or medio instead of “large” and “medium”. Which, to be honest, is a little pretentious. Especially when they get it wrong.

The Italian word for coffee is caffè, latte means ‘milk’ and macchiato means ‘marked’ – we mentioned these above.

The person who makes coffee is the barista, also an Italian word, and if you want a larger shot sometimes you ask for a doppio, instead of a “double”. Most people are familiar with these.

The French word for coffee is café and the word for milk is lait, giving us café au lait. We’ve already mentioned this too.

Café is also the Spanish word for coffee, and you may see café cortado on menus. This is an espresso shot mixed with about the same amount of milk, a popular way to drink coffee in Spain. Leche is Spanish for ‘milk’, so if you see a café con leche, it’s the same as a café au lait.

If, however, you ever see a menu offering a café latte or a caffè au lait, you will know that somebody somewhere has found all this coffee jargon just a little bit too much to handle!

So now that you know the difference between cappuccino vs. latte vs. macchiato vs.

mocha and all the others, the coffee shop should hold no more fears for you.

You can boldly walk in and ask for an iced caramel dry cappuccino and you’ll know exactly what to expect.

Do you enjoy creative new-style coffees or do you always plum for a dependable Americano?

If you have any questions or comments, please leave us a message, we love hearing from you.

And if you enjoyed our article, as always, please don’t forget to share!