Mexican food – and Tex-Mex – is well established as a well-known international favorite, and you can find a Mexican restaurant pretty much wherever you travel. However, within the country itself, street food is an integral part of the local culture, with many Mexicans enjoying tasty morsels bought inexpensively from roadside carts at least a couple of times a week.

For this reason, no trip to the country can be considered complete without sampling some of the delicious delights on offer – and to help you learn more about what choose, here are our top 27 Mexican street food items you need to try while you’re there. 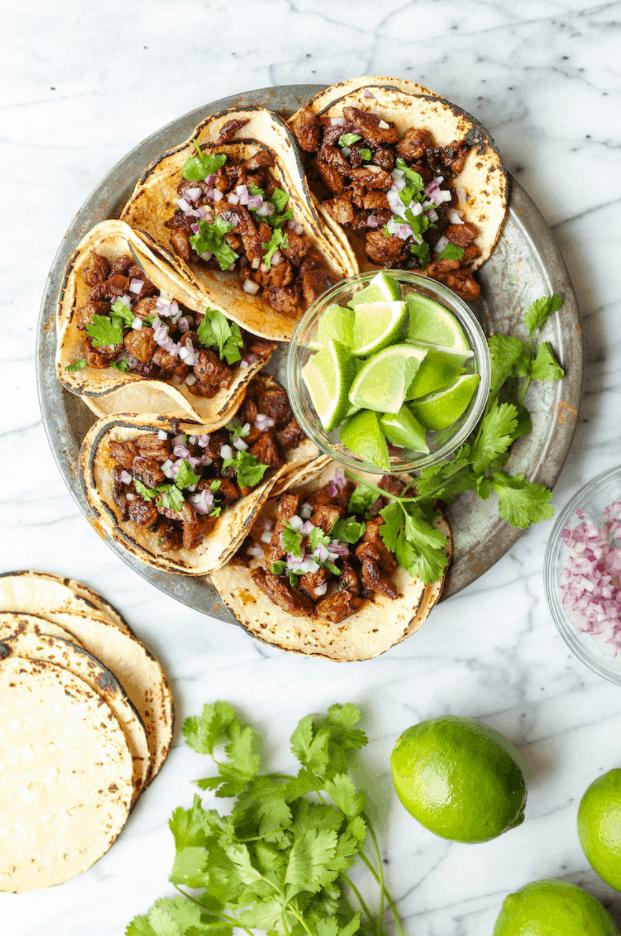 Of course, we have to start any list of Mexican street foods with tacos, one of the most popular, ubiquitous and iconic snacks in the country. There is a huge number of variations on the theme, but most people understand the basic concept – tortillas cooked on a griddle and stuffed with invariably delicious fillings. Standard options include meat, but you can also go for things like offal or brain if you’re in the mood for something more ambitious.

Tacos al pastor deserve a special mention of their own since this is a snack you’re likely to want to go back to again and again. Brought to Mexico by Lebanese immigrants in the late 19th century, they are stuffed with slices of meat cut from spit-cooked meat. They are reminiscent of the Middle Eastern shawarma – but in Mexico, the meat used is usually pork rather than lamb. 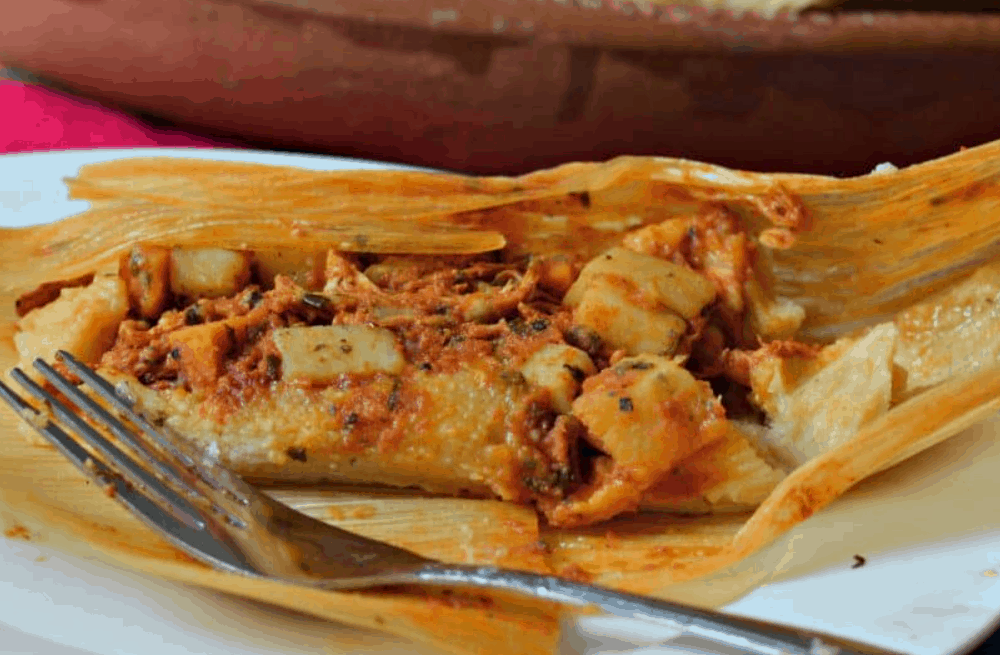 Tamales are an ancient Aztec food consisting of corn masa dough wrapped in corn husks or banana leaves, steamed and stuffed with a range of fillings. You’ll find both sweet and savory versions wherever you travel, and they are a good place to start experimenting with street food when you arrive in Mexico since they’re both simple and hygienic. They’re available throughout the country but are most closely associated with the Oaxaca region. 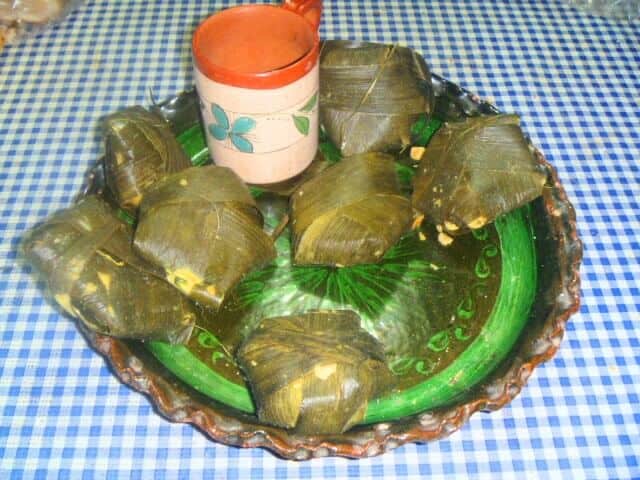 Corundas can be seen as a special type of tamale that are distinctive for two reasons. The first is their unusual triangular shape, which is a sure way of identifying them, and the second is that they are often made plain without any filling. A simple snack that is best enjoyed with a little spicy sauce and a touch of cream, this is a variation on a well-known classic that’s well worth checking out whenever you see them being made. 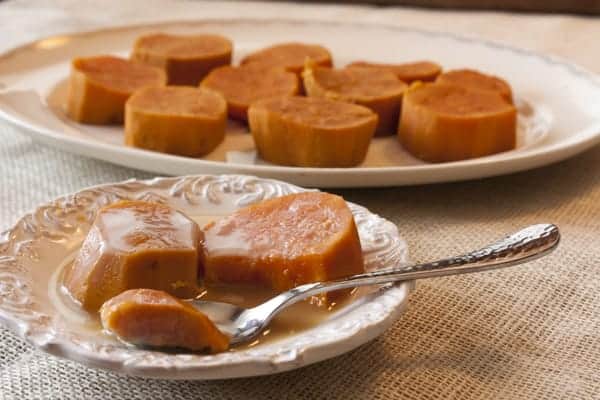 An old-fashioned and traditional Mexican street dessert, camotes are sweet potatoes with a topping of jam and condensed milk. This might sound like a strange combination, but once you try it, you’ll realize just how well it works. You’ll usually hear a camote cart before you see it due to the distinctive high-pitched whistle they emit when steam is released from the oven used to cook the sweet potatoes. 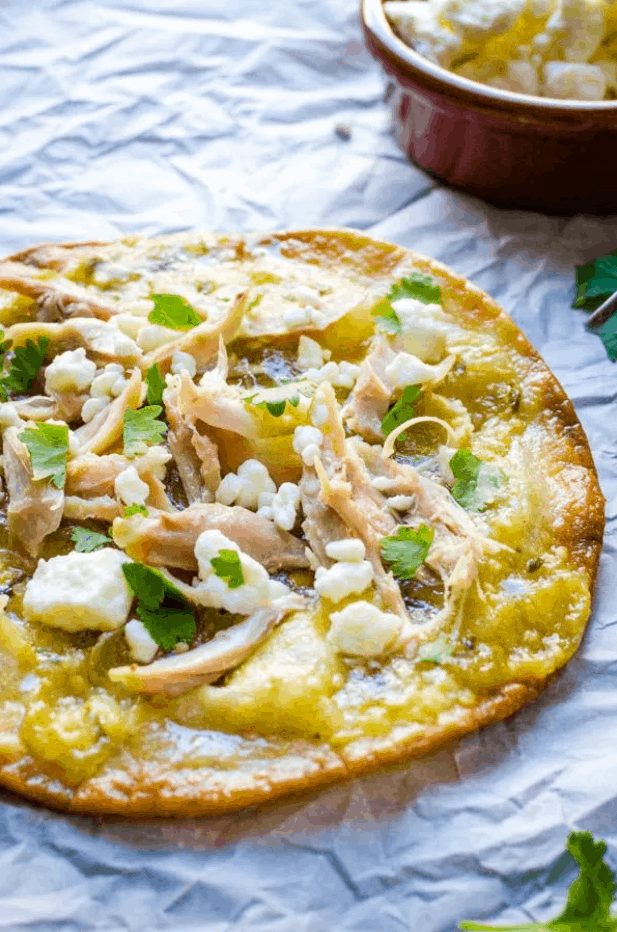 With a distinctive shape that’s reminiscent of a boat, chalupas are thin, crispy tortillas with a meat topping of pulled pork, ground beef or shredded chicken accompanied by cheese, potatoes and chili sauce. A delicious snack eaten alone but also a common starter when sitting down to a proper meal. 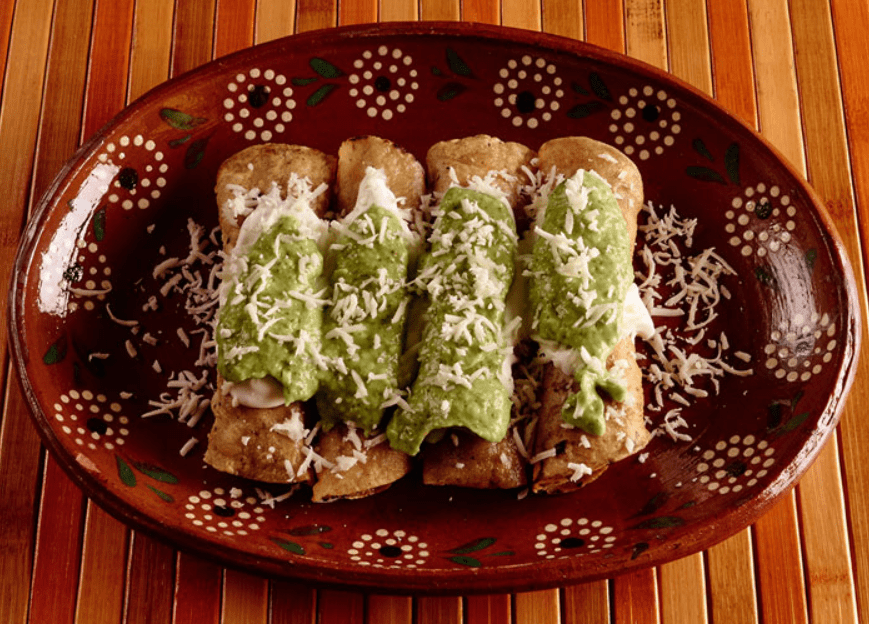 Taquitos and flautas are two similar snacks that you’ll find on the street in Mexico and that are also popular across the border in Tex-Mex places in the US too. As you may guess from the name, taquitos resemble small tacos and include fillings like chicken, beef, cheese and vegetables. While taquitos are made using corn tortillas, flautas are made with flour tortillas – but otherwise, the concept is essentially the same. 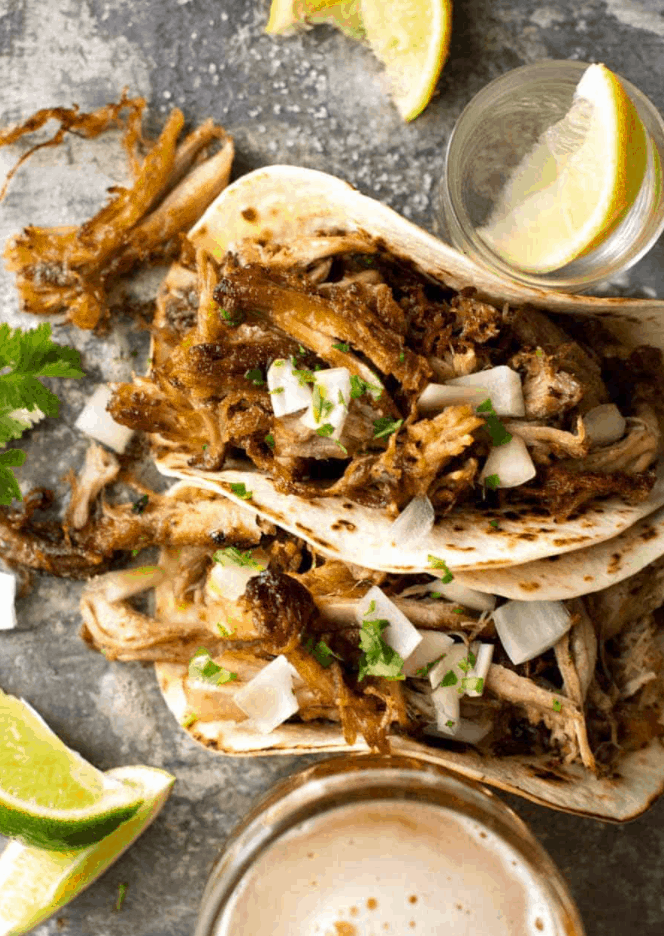 Most closely associated with the state of Michoacán where carnitas are found everywhere – from humble street stalls to more upmarket restaurants. Carnitas consist of tender slow-cooked pork that is served with tortillas and other ingredients like raw red salsa and guacamole. A snack you need to track down and try during your time in Mexico if you’re a fan of meat. 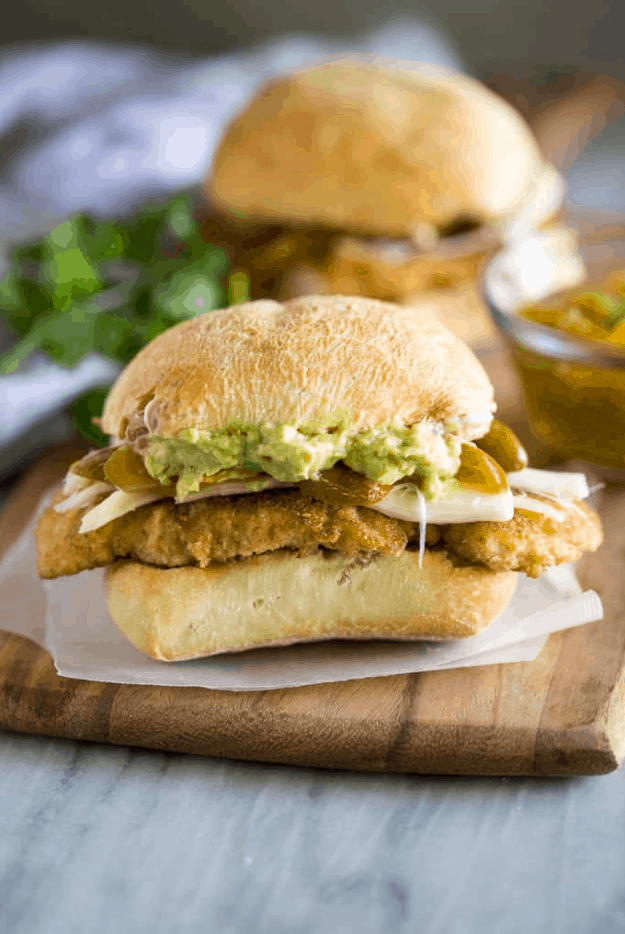 Lots of places around the world have taken the humble sandwich and turned it into something special and unique, and the torta is the Mexican take on this international favorite. Imagine crispy rolls sliced open and stuffed with all your favorite Mexican ingredients like succulent meat, beans, avocados, chili sauce and just about anything you can imagine. Yes, it’s basically a sandwich, but it’s also so much more! 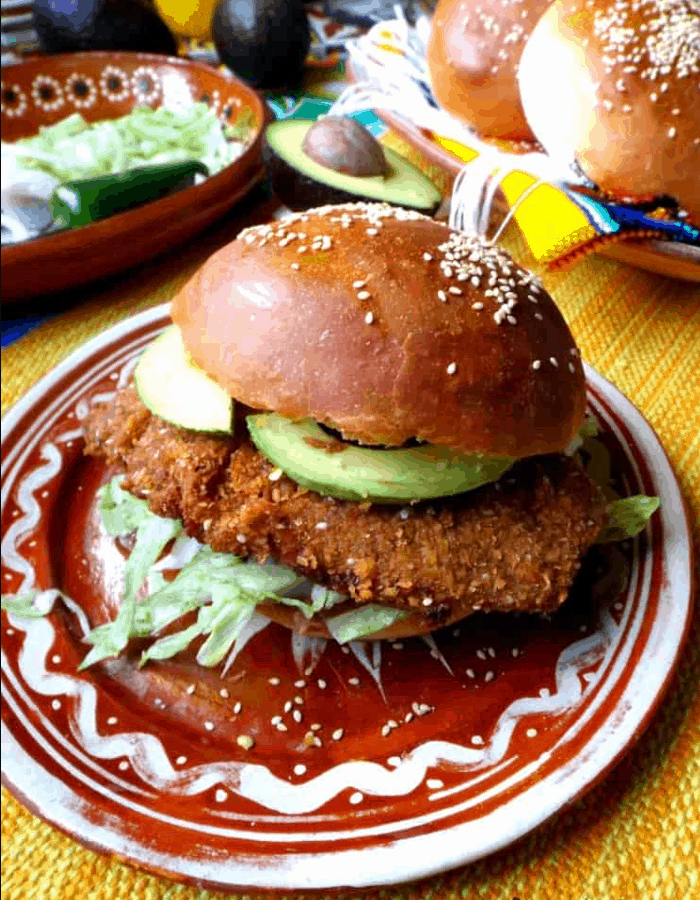 Cemitas are another type of bread roll-based creation that you will be able to find if you visit the city of Puebla. Extremely filling, they are made of heavy bread stuffed with breaded chicken, beef or pork along with cheese, peppers and onion. They are juicy and flavorful, and if you have one of these for lunch, you won’t find yourself feeling even vaguely ready for more snacks until well into the evening. 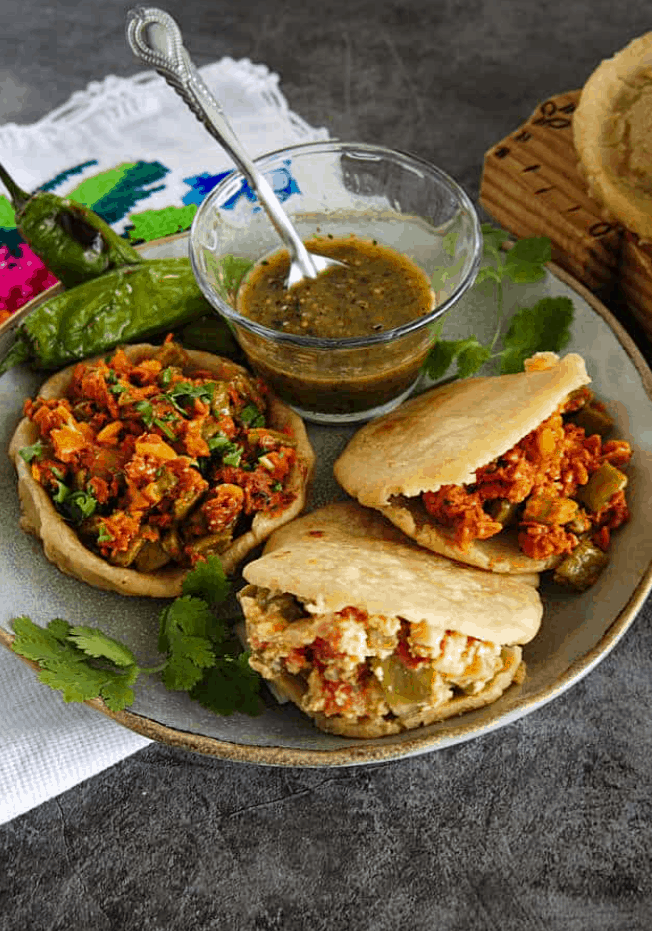 Two related Mexican street food favorites are sopes and gorditas. A sope is similar to a corn tortilla except thicker, giving it a chewier texture and making it a heartier snack. This is cooked on the griddle before being given toppings such as beans, cheese and meat. Gorditas are a similar idea, but after being fried on the griddle, they are then split open, and the ingredients are stuffed inside rather than being put on top. 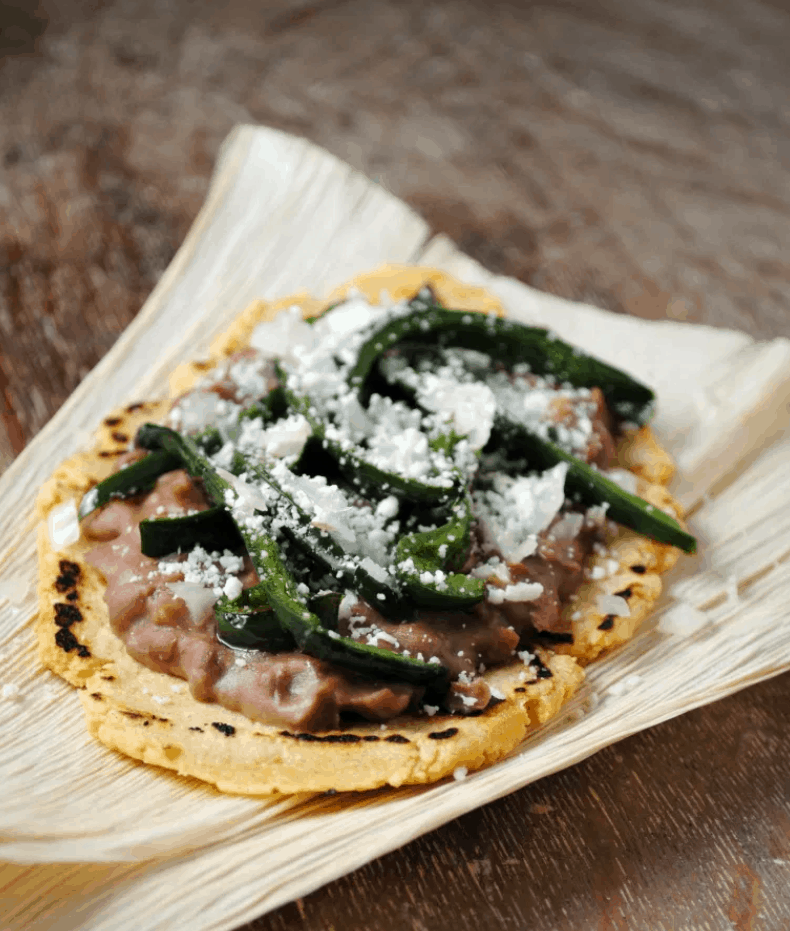 A variation on the idea of sopes and gorditas, huaraches are another type of tortilla-based street food option, this time oval-shaped and topped with beans, meat, lettuce, and cheese. Beans are sometimes also mixed into the dough before cooking, making the tortilla thicker, more filling and even more delicious! 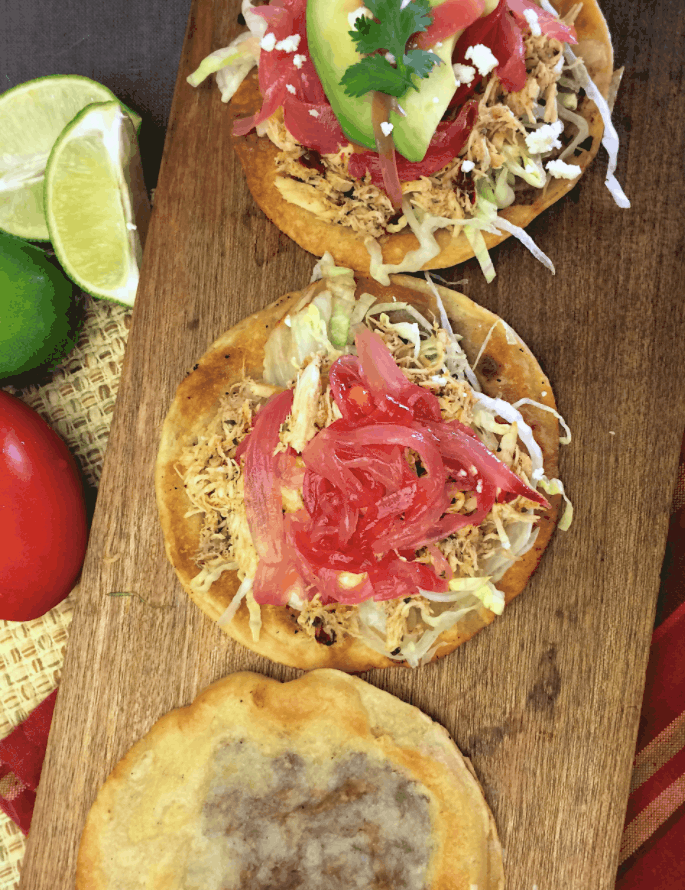 Yet another version of grilled and topped tortillas similar to sopes, gorditas and huaraches is panuchos from Yucatán. They are stuffed with beans before being fried, which gives them a satisfyingly chewy and greasy texture. They are then topped with salad and chicken or other meat and, if you’re feeling brave, some extra-spicy sauce. 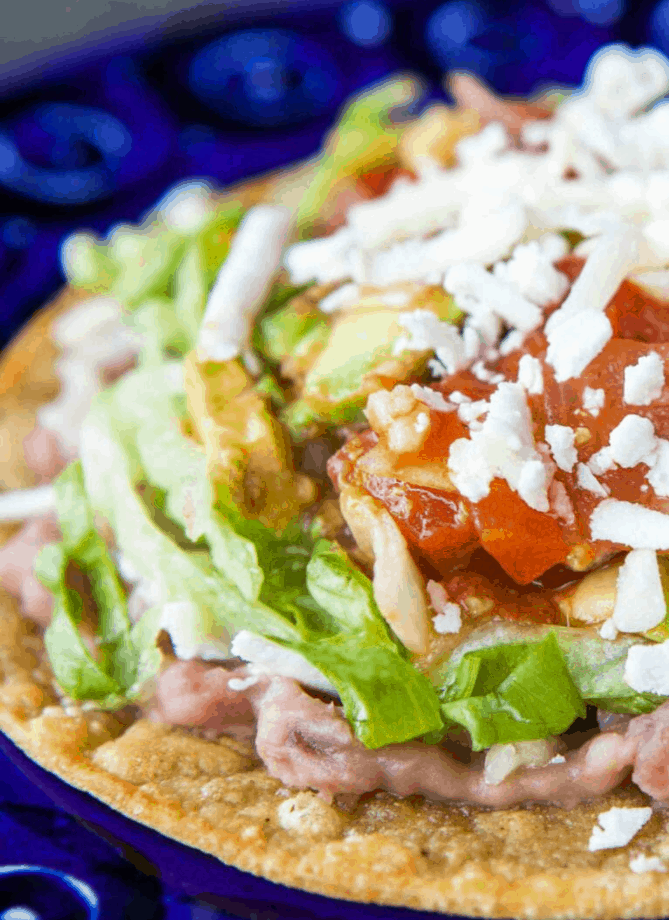 As you have probably already worked out by now, much of Mexican street food is based around the idea of some kind of tortilla paired with assorted toppings or fillings. Another delicious version to look out for is tostadas, a thin and crispy corn tortilla topped with just about anything you can imagine. An irresistible snack and one you’ll look forward to eating again and again. 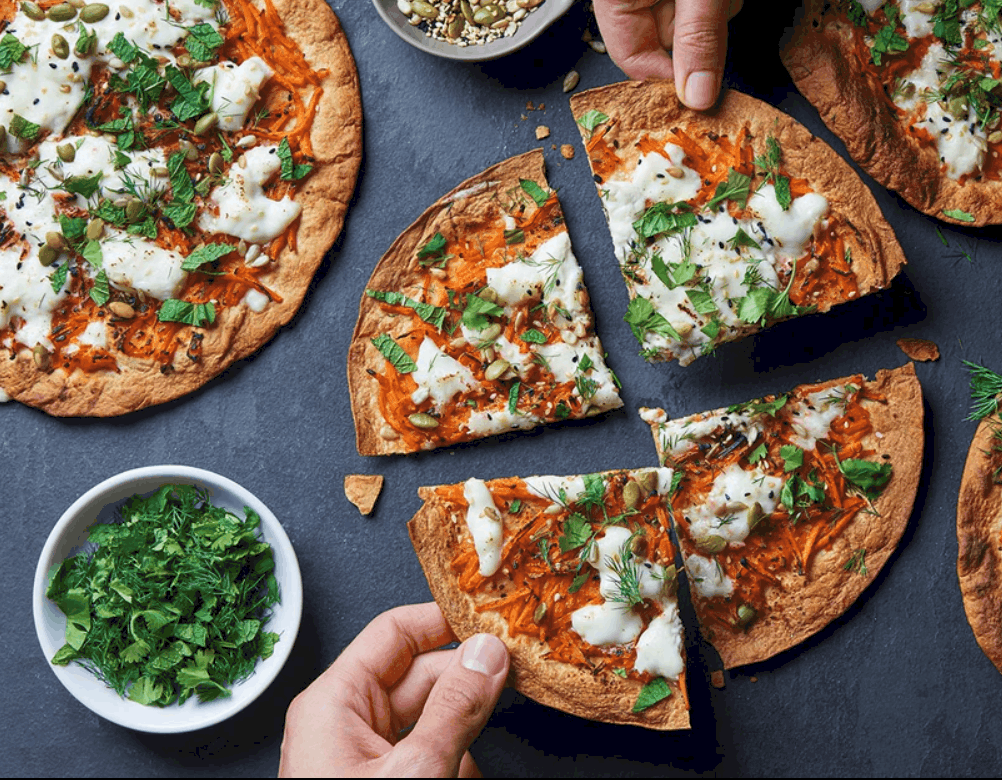 Similar to tostadas but bigger and spread with mole sauce along with salad, cheese and meat toppings, this is a treat associated with Oaxaca state. Unsurprisingly, tlayudas are often referred to as “Mexican pizza”, and if you are passing through the area, this is a local specialty that should be on your list of foods to try. 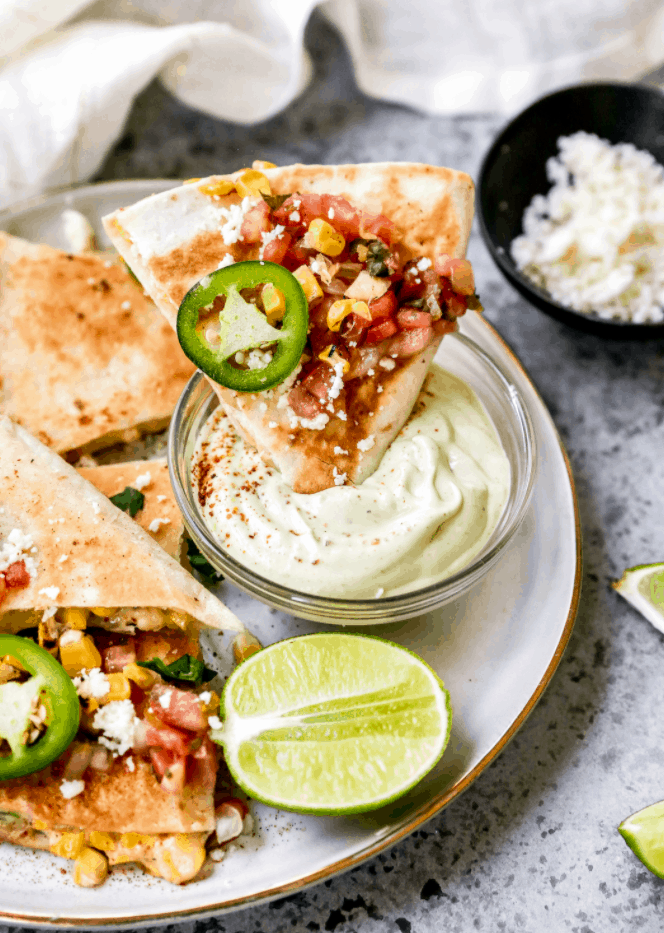 Consisting of a tortilla filled with cheese and other ingredients and then rolled up, quesadillas are another popular Mexican snack that is well-known outside of the country. The most common cheese used is the stringy quesillo from Oaxaca, which works especially well. They are usually toasted, but you can also find them deep-fried and topped with beans, guacamole and salsa. 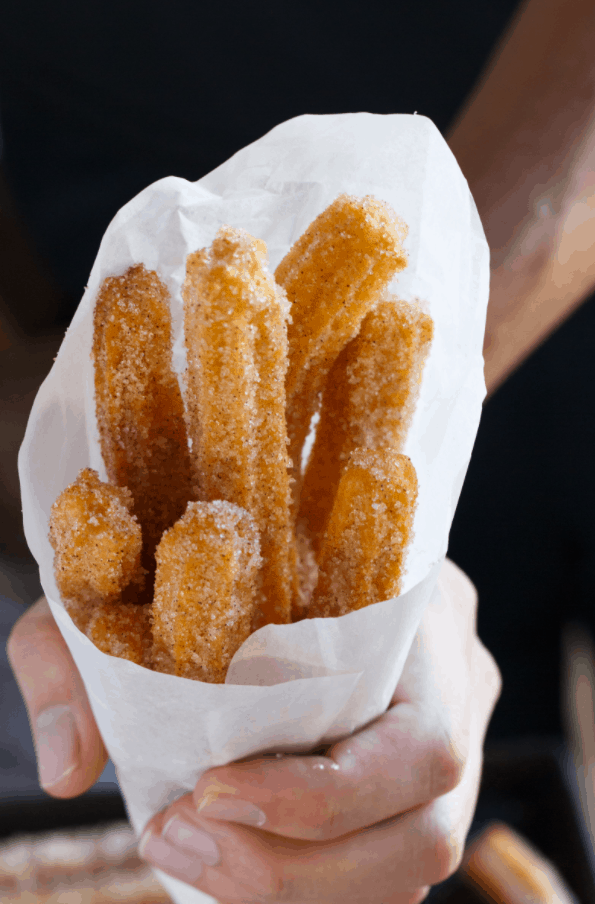 A Spanish classic that is also immensely popular in Mexico, churros are long sticks of deep-fried dough that are then sprinkled with sugar and preferably enjoyed while still piping hot. This is a simple but delicious treat that will become an instant favorite of anyone with a sweet tooth, especially when combined with chocolate sauce! 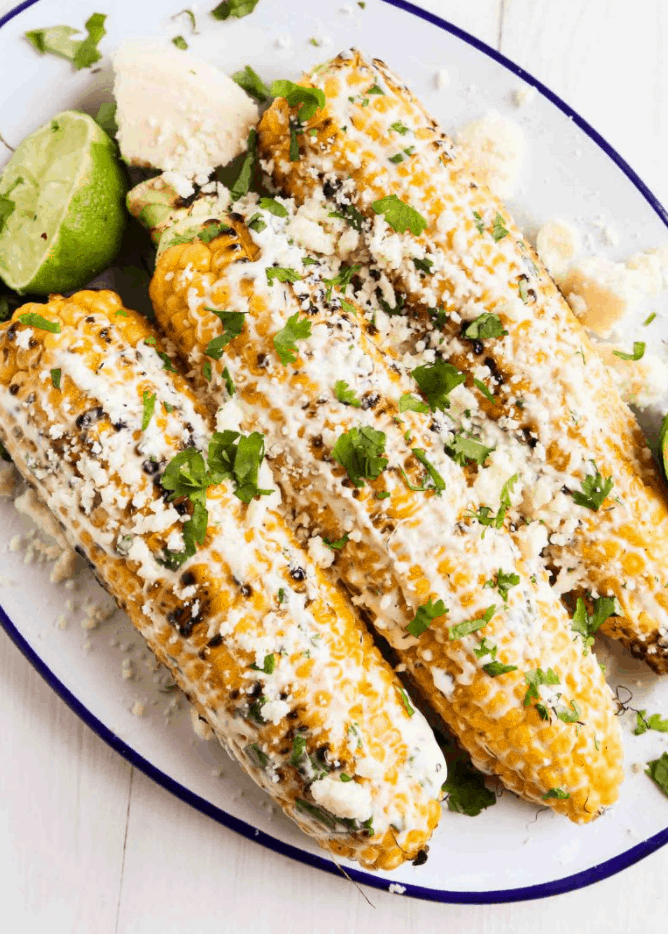 Cobs of corn are a street food staple almost anywhere in the world where street food is sold, and of course, they are a firm Mexican favorite too. The local version, known as elotes, involves grilling the cob of corn before smothering it in a combination of mayonnaise, queso fresco and chili powder before serving it up on a wooden stick. Elotes are normally eaten as a late-night snack rather than purchased during the day. 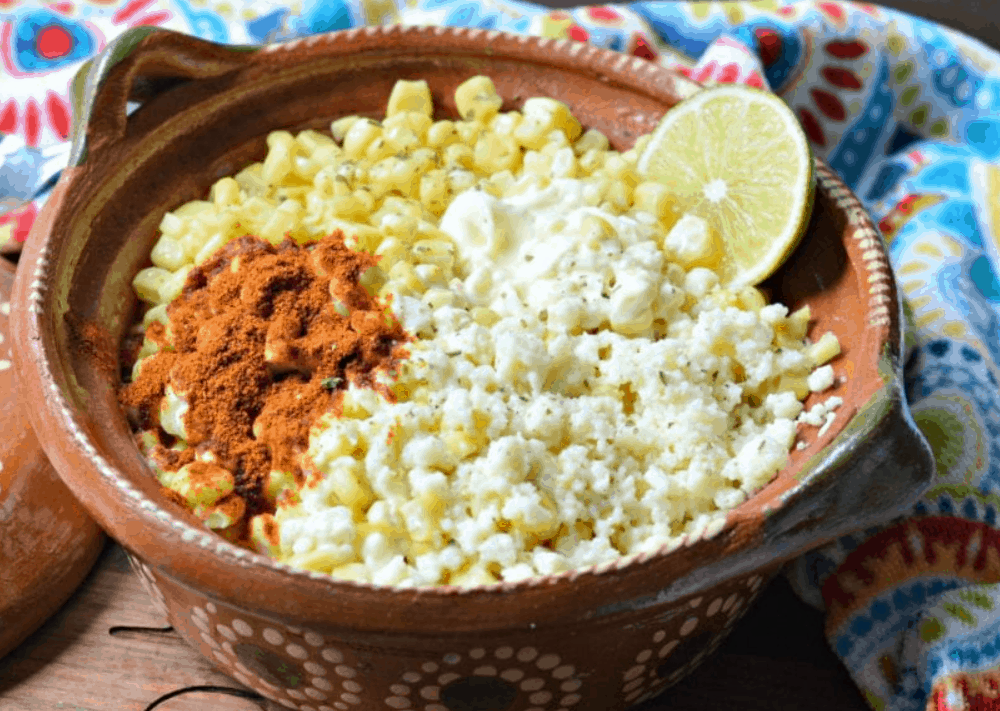 Like elotes, esquites are made from corn, but rather than grilling the corn on the cob, it is removed and served in a kind of thick soup, along with all the same ingredients that are used when preparing elotes. This is another snack you are more likely to encounter in the evening than in the daytime. 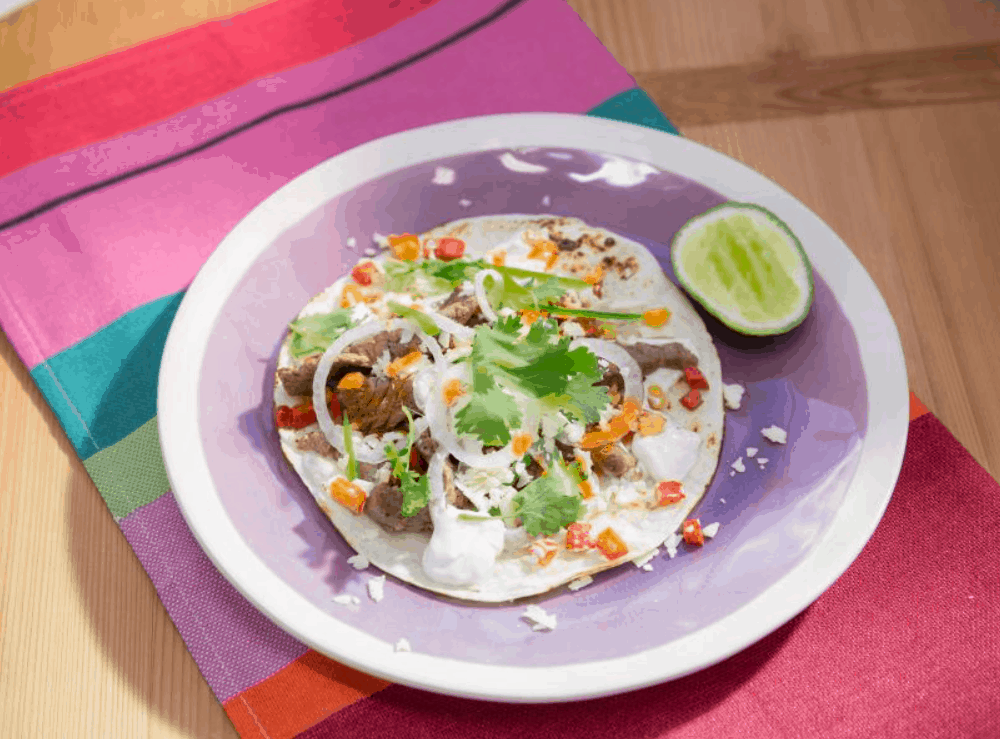 Fajitas are well-known Tex-Mex dish that is popular in Mexico and one of the most recognizable Mexican snacks around the world. Fajitas were originally wheat flour tortillas containing grilled skirt steak, although nowadays they can be made with more desirable cuts of beef or other ingredients like chicken or even seafood. When you buy them in the street, you will often also have the option of adding other ingredients such as guacamole, sour cream and more. 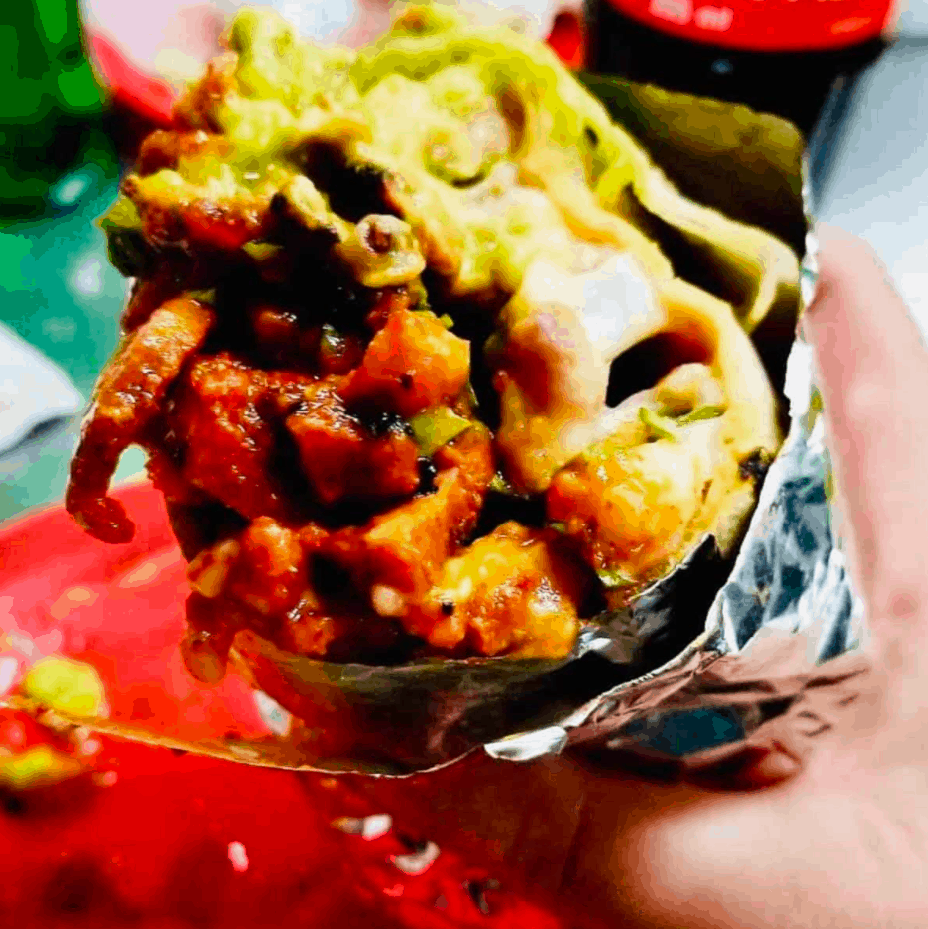 Like fajitas, burritos are common in Mexican and Tex-Mex restaurants around the world but are still a popular street food choice in the land of their origin. Usually made with ground beef rather than strips of steak, they are recognizable by the way they are rolled up and closed entirely. Burritos are popular in restaurants but can also be found prepared outside by street vendors. 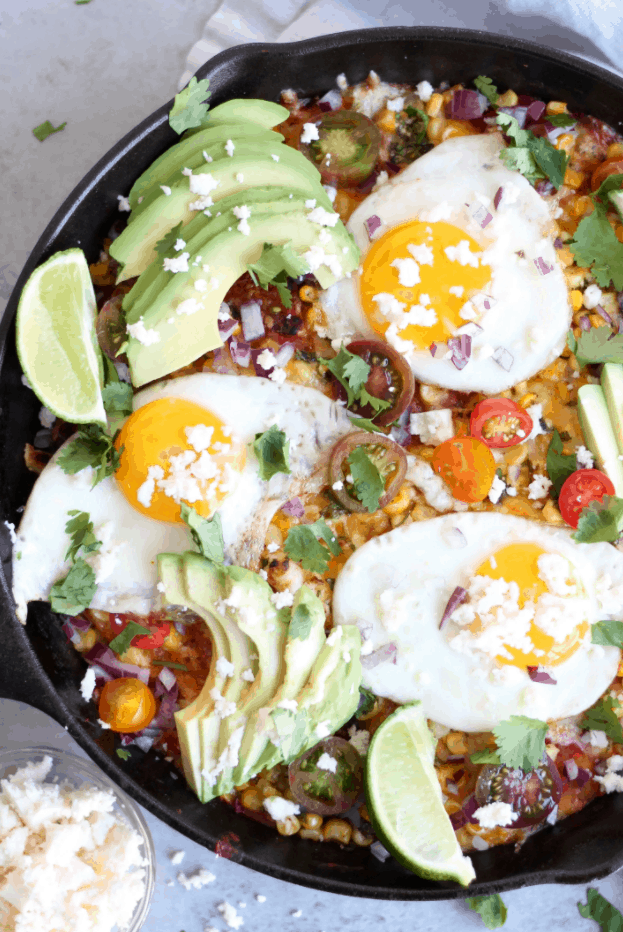 These are triangular tortillas that are deep-fried before being topped with sour cream, cheese and spicy sauce. This is a traditional option for breakfast and a good one to try if you want to eat like the locals. 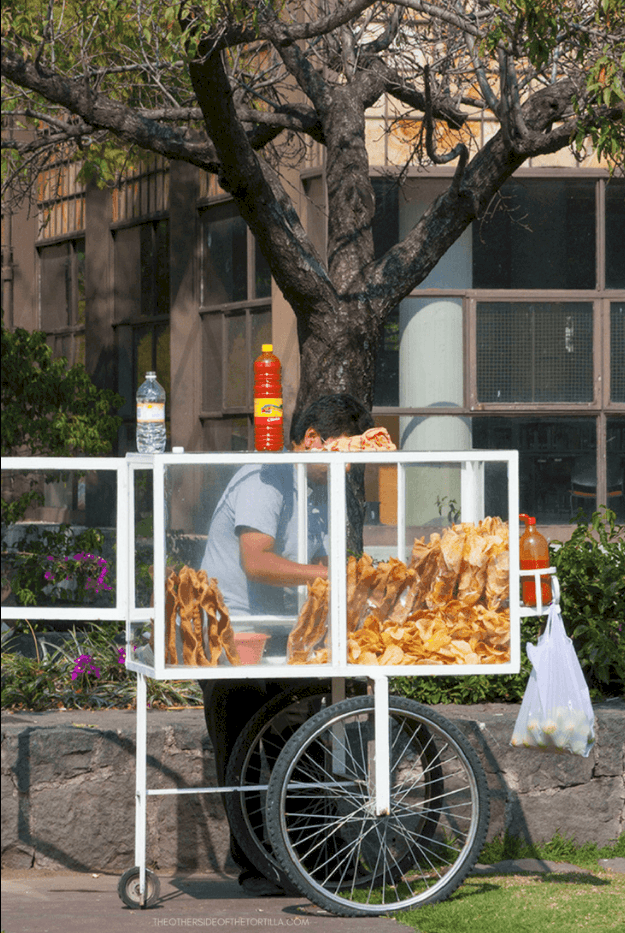 A traditional street food snack that has been around for years and is still popular to this day. Essentially, this consists of pig skin that is deep-fried so that it becomes fluffed-up and crunchy. Once ready, you can also add some spicy sauce to add to the flavor, making this a perfect choice to enjoy with an ice-cold beer. 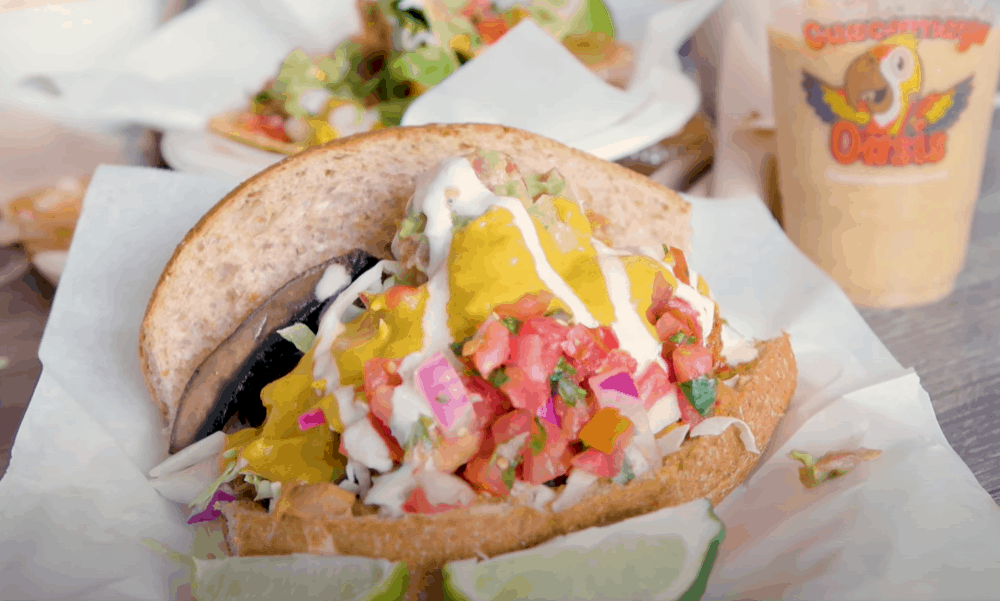 If you like the idea of fried pig skin as a snack, you might also enjoy trying a guacamaya, a special type of tostada that combines chicharrónes, pickled pork rind, hot sauce and lime in a crispy bread roll. The texture of the filling is part crunchy and part chewy, and each bite is a riot of sometimes unfamiliar but always delicious flavors. Not among the most widespread of street foods – but well worth sampling if you see them being sold. 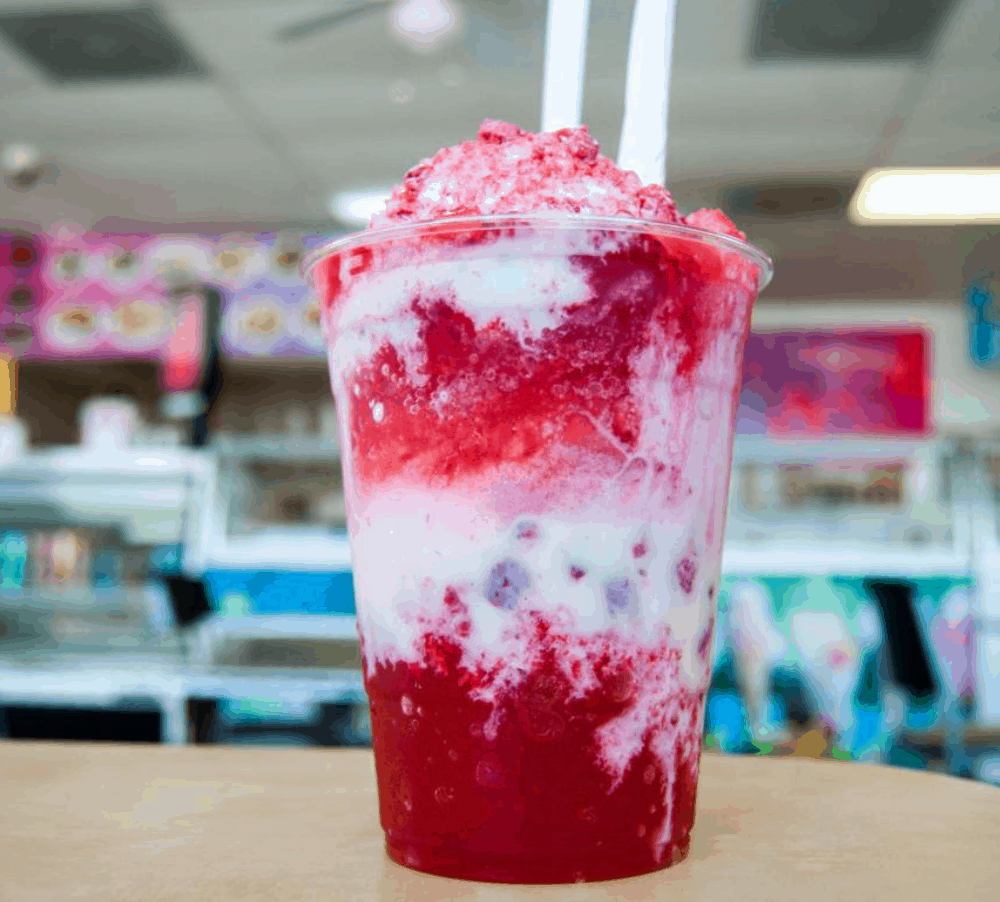 A dessert you’ll find in many countries around the world, raspasdos is the Mexican version of shaved ice. Piled into a cup and topped with all manner of sweet syrups, fruits like strawberry, mango and tamarind and just about anything else you can imagine. For a more local flavor, you can also try the typically Mexican spicy version that includes chili powder and lime. Delicious and perfect for cooling down under the scorching sun of a hot Mexican day. 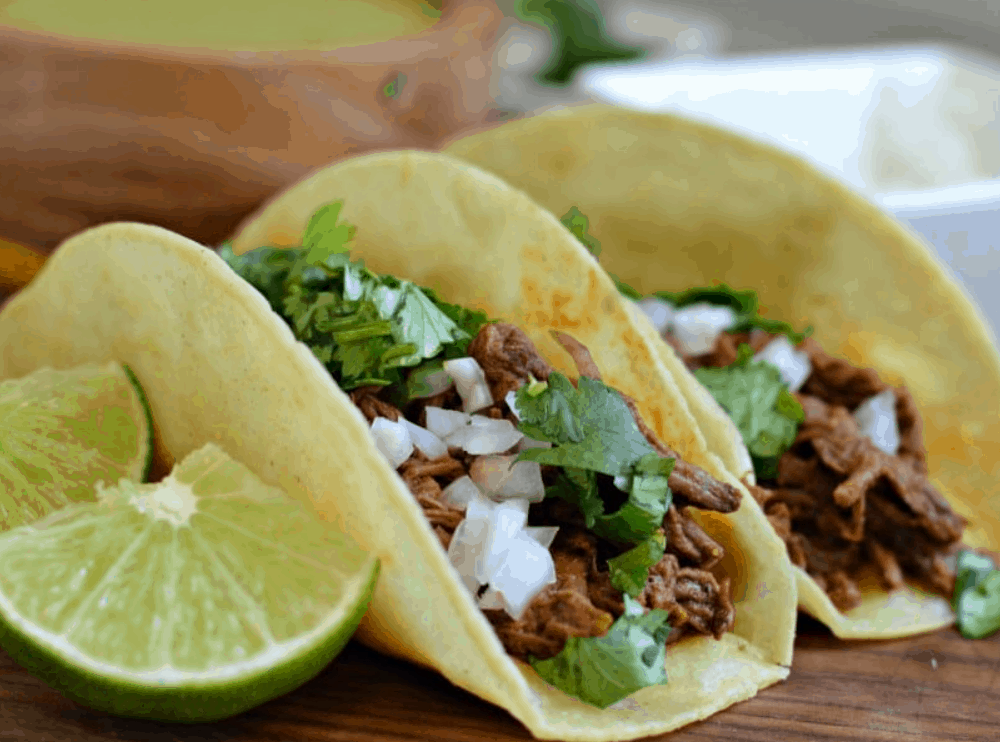 A dish made from slow-braised mutton that is among the most famous foods of the Estado de México region. The meat is served in a taco, which is either soft and filled with a pulpe-based sauce or deep-fried and topped with sour cream and cheese. There’s a reason why this is such a well-known Estado de México specialty, and if you’re passing through it’s something you simply have to try. 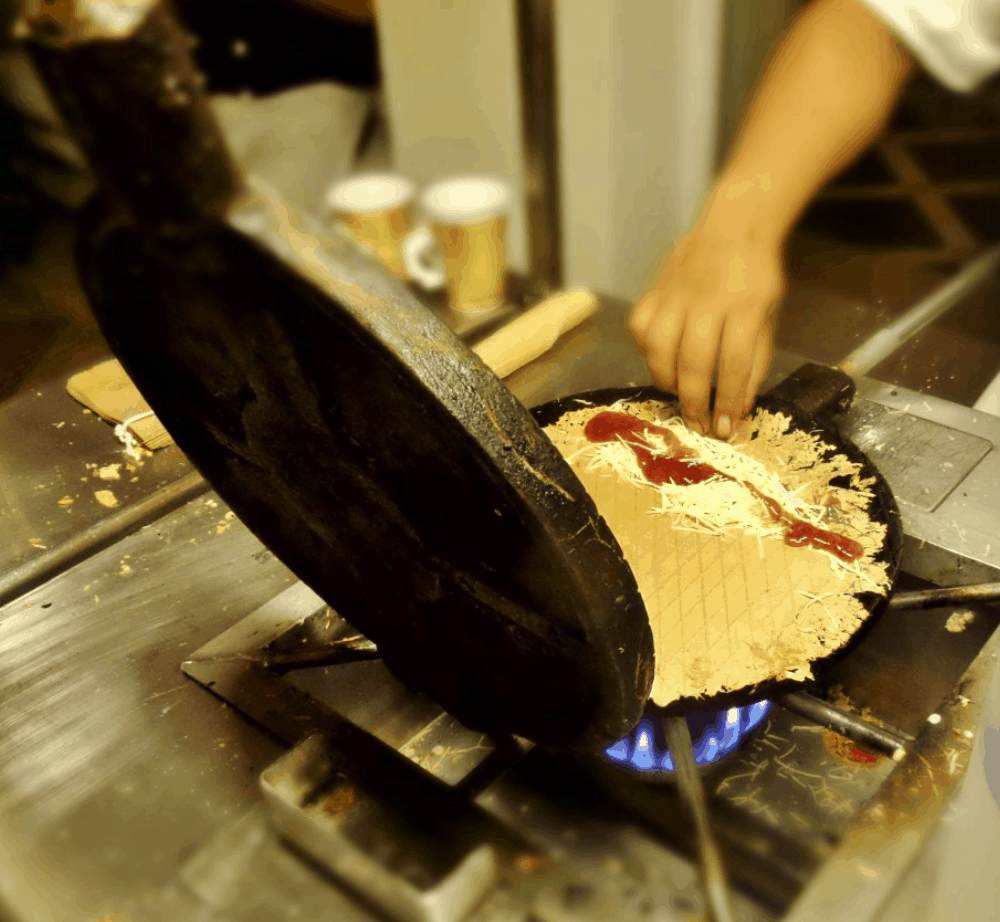 If you’re in search of the ultimate Mexican street food dessert that deliciously combines two unlikely ingredients you’d probably never think of pairing, look out for marquesitas in and around Yucatán state. The two incongruous ingredients in question are cheese and Nutella, which are spread over a thin pancake and then rolled up inside. Of course, these street pancakes are available with other fillings, but why would you want to pass up on the chance to sample the exquisite combo of the original?

Some classics as well as more unusual specialties

In our list, we’ve given you some of the classics that are available throughout the country along with some specialties that are only available in certain locations.

Enjoying Mexican street food is an essential part of any trip to the country, and hunting down and sampling as many of these snacks and treats as you can find will help make your trip even more unforgettable.