Besides the convenient service a dispenser provides, having a liquor dispenser is also very cool, especially if you’re having a party at your home.

However, liquor dispensers are not cheap and can reach up to hundreds of dollars. But, not anymore! With these incredible 18 DIY ideas that we’ve put together for you, you can build great cost-effective liquor dispensers that are just as good as commercial ones.

On top of that, if you’re a DIY lover, the fun and satisfaction while doing the project is unparalleled.

A wine bottle is cut and used as the liquor holder on top of the dispenser. It enables you to pour the drink onto the holder simply, and you don’t need to replace the liquor bottles every time, thus, reducing spill risks.

Once you gather all the necessary materials and tools required to make this dispenser, the process is straightforward to follow along. Unlike the first DIY drink dispenser, this liquor doesn’t require extreme woodworks.

The Youtuber shows all the steps and parts clearly, and the angle of the camera is very accurate, thus, leaving no room for confusion.

This simple liquor dispenser is very aesthetically pleasing. The combination of rose gold coil and the silver holder on the top looks very stunning. The best part of this DIY is that you don’t need any fancy equipment to complete it.

However, this tutorial has some downsides as the list of materials is only accessible to the Youtuber’s Patreon members. The base is also not wide enough to resist sudden jerks.

Along with the wooden one-tap liquor dispenser, this YouTube video also features a DIY plastic kitchen vegetable drainer holder and a DIY systemic notes board.

Especially if you’re good at woodworks and if you have the required equipment, you can make this great liquor dispenser single-handedly.

If you’re planning on DIYing a wall-mounted liquor dispenser, you can follow-along DIY Tv’s Whiskey dispenser DIY tutorial. The Youtuber creates a stunning wooden background with the help of black paint and epoxy resin.

You can make this whiskey dispenser even if you have slight woodworking skills, and the best part is that you can customize the background as per your personal taste.

The famous duo of Jack and coke deserves an excellent DIY dispenser, doesn’t it? The guy of the channel Sdmcustom Woodworking makes a two-tap wooden DIY jack and coke dispenser.

This dispenser also has a small shelf for ice cubes at the bottom. Interestingly, you don’t have to limit yourself to Jack and coke cocktail every time and incorporate any two drinks of your choice in this DIY model. 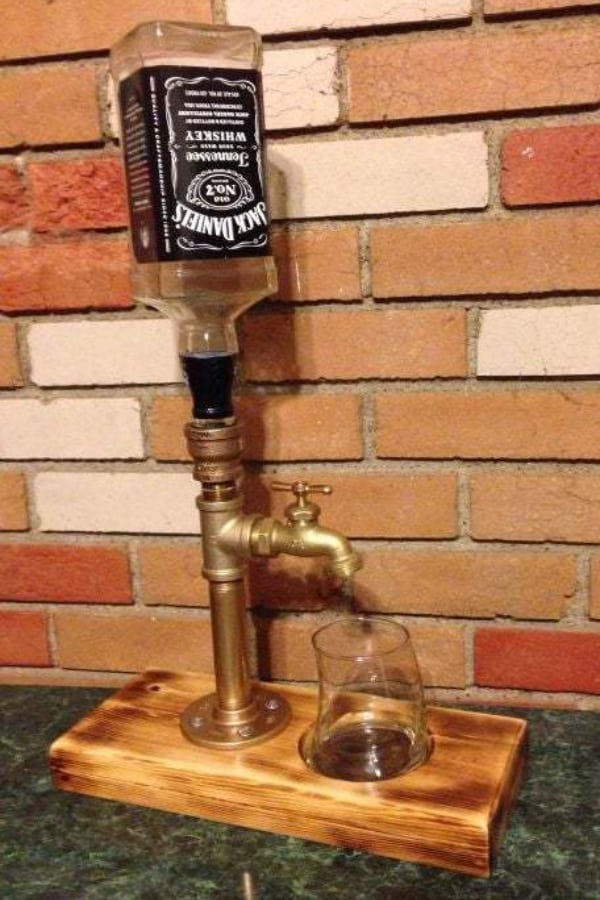 Most of the YouTube videos on DIY liquor dispensers were not elaborative enough, mostly on the materials they used in the DIYs, as they were not listed properly.

This written blog post has made this DIY very convinient with their in-detail instructions and a list of materials and tools. To create an effortless wooden base single-tap liquor dispenser, follow the step by step guidelines provided in the post.

Creativity is limitless! You’ll be surprised by how this robot liquor dispenser is so cool and yet so easy to make. The robot looks like it is on a battlefield holding a gun, and the coolest thing is that the liquor is poured from the gun.

It is an easy-to-follow video tutorial, and you don’t need any extravagant tools or skills for this project. All the necessary items are listed in the description box.

In case you don’t have any fancy equipment and have a wooden box lying around your house, turn it into a Jack Daniels dispenser.

All the materials required for the DIY are listed at the beginning of the video, and every process is elaborated in detail. This tutorial might be a perfect one for you if you want to make a simple and cost-effective liquor dispenser.

We’ve already talked about fierce robot liquor dispenser DIY; head over to this YouTube video to see how this guy created another robotic ‘Pembro’ alcohol dispenser.

The procedure is not very complicated to follow along, and the Youtuber mentioned that he completed the project under $60, which is pretty decent for such a cool dispenser. Moreover, the fun you have while making the dispenser is invaluable in itself.

11. Crafty _This DIY booze faucet is what your bar is missing!

I admired the fact that this video instructed its viewers to clean all the pipes at the beginning of the tutorial. As the length of the video suggests, it is a brief video with short instructions and quick demos.

The outcome of this DIY is a single tap liquor dispenser that dispenses a combination of two drinks. The amount of each alcohol can be easily controlled using the sediment faucets on their respective sides.

This tutorial video is in German but language is never a barrier to creativity, is it? Most of the video has background music, and for few parts where the Youtuber speaks in German, you can set the auto-translation option to English.

This guy creates a single-tap whiskey and coke dispenser for this DIY project in which the flow of the two drinks can also be controlled by adjusting their respective straight shut-off valves. 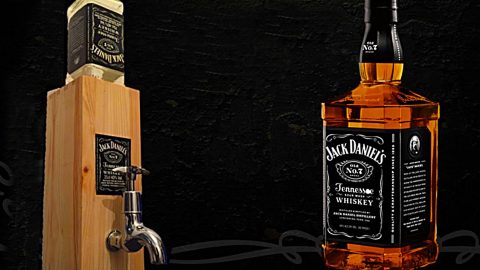 If you have a wooden box handy, this blog post will guide you on how to convert it into a Jack Daniels dispenser. All the required items are mentioned in the first paragraph.

Though elaborate DIY procedure is not written in this blog post, a tutorial video is attached at the end of the post. With around 116 Facebook shares, this DIY idea seems like a definite hit. 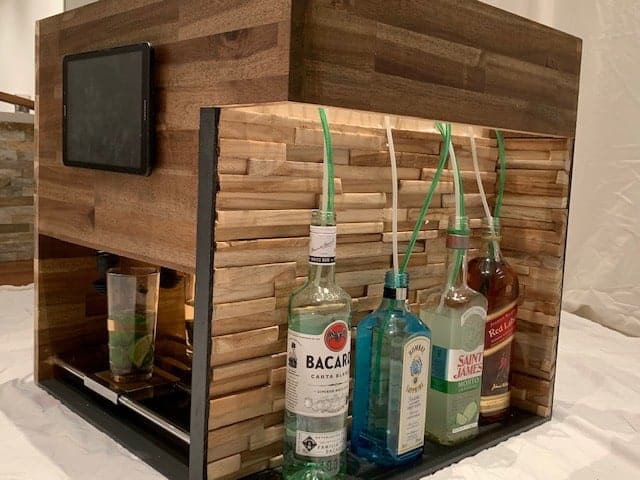 This DIY project is no joke. The automated cocktail drink machine involves both software and hardware as the dispenser station’s processes are controlled by Arduinos and a 10.1” tablet.

So, only proceed if you’re highly dedicated to making a top-tier liquor dispenser and if you have substantial knowledge in programming. The guide is very explanatory if you want to follow along, and kudos to whoever developed this brilliant dispenser model!

The whiskey dispenser DIY project in this YouTube video is incredibly unique. Instead of a wooden base, a broad glass bottle is used as a base for the dispenser. By covering the bottle with an adorable cover, this design is stunning to look at.

However, the glass bottle has to be punctured in certain places, and only start on this DIY if you have the necessary tools for cutting the glass. Besides that, this DIY looks relatively easy to complete.

Despite the language of the Youtuber being Spanish, it was irresistible not to add this robotic waiter liquor dispenser to this DIY list.

The items necessary are displayed very clearly on the table, and you wouldn’t have a hard time recognizing those plumbing essentials.

The procedure is also straightforward, and you can easily follow along with the video even if you can not understand Spanish.

It is another Spanish video on how to make a glowing wall-mounted liquor dispenser. The Youtuber speaks only for the intro and outro, so it doesn’t differ which language the video is on.

All materials and procedures are shown clearly, and if you’re skilled at woodworks and electronics basics, you’ll be creating a stunning wall-mounted single-tap liquor dispenser that glows.

18. DIY LOFT Dispenser \How To Make Dispenser for a big company part#1

It is a tutorial video on making a dispenser that consists of a working counter, primarily used for bottling whiskey and cola, and includes three alcohol holders on the top.

As the Youtuber created this dispenser for a large company, the dimensions are very high. It is part one video of a two-part series on how to make a dispenser for a big company. If you’re interested in making one, make sure to check out the part 2 video as well.

Some of these DIY ideas are very cool, some are fancy, while some are very basic and minimalistic. All of these designs bring around their own vibe to the setting.

Choose one design you loved the most, collect the tools and materials, and start making the liquor dispenser it right away. Your friends are sure to love these designs at your upcoming party.